If there were ever to be a movie made about the presidency of William Henry Harrison, the two biggest dilemmas in the production would be: 1. Who should we get to play him, Sam Donaldson or Mr. Bean? and 2. How can we possibly stretch this into 90 minutes? For, you see, no man was ever president for a shorter period of time than this old coot named Bill Harrison (Alexander Haig notwithstanding).

The year was 1841. Our fledgling nation was a mere 65 years old. And from March 4th to April 4th, this cockeyed bastard (see enhanced illustration) was the most powerful man in the land. A whole 30 days. If you’re as intrigued as every red-blooded American should be, you just can’t wait to tear through these pages of history as fast as you can.

The First Part of the Story

There have been many occasions in American history when some bozo who knew nothing at all about government got elected president just because he was a kick-ass military hero. Bill Harrison was exactly one such bozo. This nutcase was born in 1773 on a family plantation in Berkeley, Virginia. His pop, Benjamin Harrison, was a real big shot and quite the firecracker. He served in both Continental Congresses, and daddy also signed the Declaration of Independence. Maybe you’ve heard of it.

Anyway, Little Billy grew up fast. He was home schooled and later went to Hampden-Sydney College for a little while to study medicine. But since you can’t make a living being a doctor, he promptly dropped out because he had this bright idea like he’d join the army. Listen up, kids. Forget about school. Join the army like Bill Harrison did, then maybe you can be president for 30 days and die of pneumonia. Ah shit, I just ruined the ending.

Where was I? Oh yeah, 1791: the 18-year-old William Henry Harrison joined the army. 1791 was the same year that Mozart died, and I can almost guarantee that they never met, and at least at this point, Bill had probably never heard of Mozart.

Three years into his army stint, he was 21 and serving in the Ohio Indian wars (never heard of ’em) under some bloke named “Mad Anthony” Wayne (never heard of him, nor have I heard of what he was so mad about). Soon after that, they made Bill into a captain and put Ohio’s Fort Washington under his command.

Now, either Fort Washington was some really super small fort, like the generals were just being nice by calling it “Fort” Washington, or maybe the army was just real short of captains or something. Anyway, Captain Bill was chillin’ for a while in Ohio. While he was up there doin’ all his fort-commanding and stuff, why, who should waltz into his life but some foxy broad by the name of Anna Symmes. Ow!

Tell me about it! They always say there’s plenty of fish in the sea, you know, but the Cap’n wasn’t about to throw this little fishy back, if you know what I mean. That Anna Symmes must have been one fine piece of ass, ’cause they tied the knot almost immediately. Go William! It’s your birthday! Get busy!

In the late 1790s, John Adams was president, and only the second president, at that. President John took a liking to Captain Bill and anointed him secretary of the Northwest Territory. So Bill left the army to do whatever the president wanted, I mean, that’s what you’re supposed to do, right? Real soon after that, when he was 26, the Northwest settlers elected him as the Territory’s first delegate to Congress. Way to go, Bill!

A year after that, the Northwest Territory got divided into Indiana and Ohio, and President Adams had something else up his sleeve for W.H. Harrison, the governorship of the Indiana Territory! Billy couldn’t hardly hold a job for more than a year or so ’cause he kept gettin’ promoted so much and stuff. Am I right or am I right? 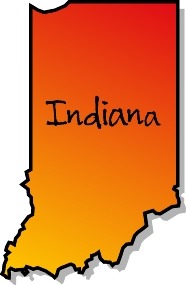 Man, when he was Governor of Indiana, that’s when he was really a shining star I bet Anna was real happy she got a hold of this gem! Governor Harrison – that’s what they called him then since he was the new governor and all – anyway, Governor Harrison was a total stand-up guy. He was all like helping the Indians and stuff. He vaccinated all the Indians against smallpox, and he gave them the opportunity to get medical assistance and an education. What a cool dude! And man did the Indians love him! They thought he was so cool that the chiefs of the major tribes were like signin’ treaties with him left and right.

One day, the Indian chiefs scribbled their names on this little memo called the Treaty of Fort Wayne (honestly) which took 2.5 million acres of Indian land along the Wabash and White Rivers and gave it all to Whitey. A real humdinger! The celebration didn’t last long, though, ’cause this renegade Shawnee chief called Tecumseh and his brother The Prophet… when they caught wind of this treaty, they totally freaked out. They couldn’t believe that them other Indians was so stupid and just gave all that land to the fuckin’ honkies! Needless to say, the Shawnees and some other tribes took matters into their own hands and started shootin’ the place up.

Governor Harrison was PO-ed, if you know what I mean, and he wasn’t gonna take it lying down. Hell no! Bill got his own militia together and set out do some world class ass kickin’. And that’s exactly what happened on November 7, 1811 at Tippecanoe Creek. Reckon that wildcat Tucumseh underestimated what was going on, and the Indian forces were squashed like grapes. Poor Tecumseh. At least they named a lawn mower company after him. Bill also made a name for himself out of this skirmish. All his pals started callin’ him “Old Tippecanoe,” which is a pretty weak nickname compared to something along the lines of “Lightning Bill” or “Governor Ball Buster” or “Stone Cold Bill Harrison” – but I guess you just have to take what you can get.

The next year was 1812 and that’s when the War of 1812 broke out. Could’ve seen that one coming, eh? James Madison was president then and he put ol’ Bill in charge of the Army of the Northwest (what a weak name for an army, you know? I guess that’s kind of like Bill’s nickname. He just got shortchanged all around namewise. I would have called ’em the Assassins or the Violators or something). In southern Ontario, the Violators went head-to-head against the combined armies of the British and the Indians, at the Battle of the Thames (never heard of it). Yep, you guessed it, Bill and the Violators came out on top yet again.

Commander Bill was livin’ the sweet life, to win the battle and to have a fine lookin’ ho like Anna waiting for him at home. If I can let you in on something here, Wild Bill and Anna had ten kids together! That must’ve kept them real busy. I’m just wondering how could this guy could have time to do anything except wash up now and again. And I bet Anna and the fam’ were probably the reason he had to leave his military career behind and get another desk job. You know how chicks are always like, “Oh, I worry about you out there with all those people shooting guns at you all day,” and stuff like that, so Bill had to do something to keep her happy, you know, if he was gonna be able to keep stickin’ her enough to have ten kids. Plus, by now, Bill’s gettin’ up there. By then he was like 43 or something and his eyebrows were in danger of being declared a national forest. So in 1816 he got elected to the U.S. House of Representatives (it’s part of Congress). Then nine years later, he became the senator from Ohio.

Upon arriving home, Bill must’ve been at a party or something or maybe he was drinkin’ pretty hard and I guess maybe some of his friends dared him to run for president of the United States. He was in the Whig Party, you know, and in 1836 they just weren’t havin’ him as a candidate, and America in general wasn’t really down with the Whigs anyway.

Four years later and another few more beers, Crazy Old Tippecanoe Bill was ready to
give it another whirl. The Whigs were still pretty new and they were freakin’ kooky! At this point, they had no platform and absolutely no political philosophy, and they just went berserk with Bill’s campaign for the presidency. Total gangbusters. Like there was no tomorrow. The constituency was positively bedazzled by the spectacle, and before Martin Van Buren could say “what the…” that old nut known as William Henry Harrison was elected the ninth President of the United States.

Well, it was like as soon as this guy became president he started going around acting like his election was some awesome mandate from the people or something, when really his party was a joke and they just wanted a figurehead so they stole his name recognition and threw this wild campaign and it was a fluke that he ever got elected in the first place. Well, Bill Harrison was such a self-absorbed, stubborn old fool and he was so ready to prove he was so tough and cool and everything that he rode a white horse to his inaugural address (like he’s the Lone Ranger or something) in the freezing cold rain without a hat on!

Then when he gets there, he delivers the longest inaugural address ever! I mean, it still ain’t been beat. So he’s up there giving his hatless soliloquy for a short eternity while it’s super cold and rainy and everybody’s waiting around like, “Come on, Bill. Can we go? Nobody cares that you’re the president.” So he goes on and on about all his plans and he promises that he won’t run for a second term and all this stuff… well, as we all know, he wasn’t going have any trouble keeping that promise.

And after finally ending his freezing monologue, he caught a light sneeze which blossomed into a fresh cold which grew like nobody’s business and soon enough it developed into pneumonia and within 30 days of taking office, he bought the farm. Bill was dead.

Vice President John Tyler served out the remaining 97.9% of Bill’s term and continued all of the “important work” that Bill was working on between March 4th and April 4th.

Yes, this was the story of William Henry “Old Tippecanoe” Harrison, the ninth President of the United States who had a real big head and a hot wife and is now six feet under in North Bend, Ohio. God bless America.