Robert Franklin Suchan (pronounced SOO-kon) lives and goes to school in Bowling Green, Ohio. He has an interesting way of talking that sounds like someone from an old movie, crossed with a rock star and a basketball commentator… if you can imagine that.

He plays guitar, and at the young age of 21, his music has already taken him to Japan, Europe, and across the United States.

His favorite building in Bowling Green is the clock tower you see pictured here. He is the youngest child of a Czech immigrant father and an Ohio native mother.

Rob was interviewed and photographed in 2000 in Bowling Green, Ohio, by Scott Ritcher.

If you had a robot, what applications could it perform in your life?

It would do the thinking?

Mmm hmm. It would do all the thinking. [laughter] Dressing.

It would dress you?

It would dress me. And it would also have to function as a can opener. [laughter] These nails! They’re not gonna be with me forever, Scott. [laughter] Let’s not pretend anymore.

Pen. You know what I don’t mind are the pencils with dispensable lead. But overall, it’s just not a sharp enough… I don’t want to talk about it.

The more you use it, the worse it gets. 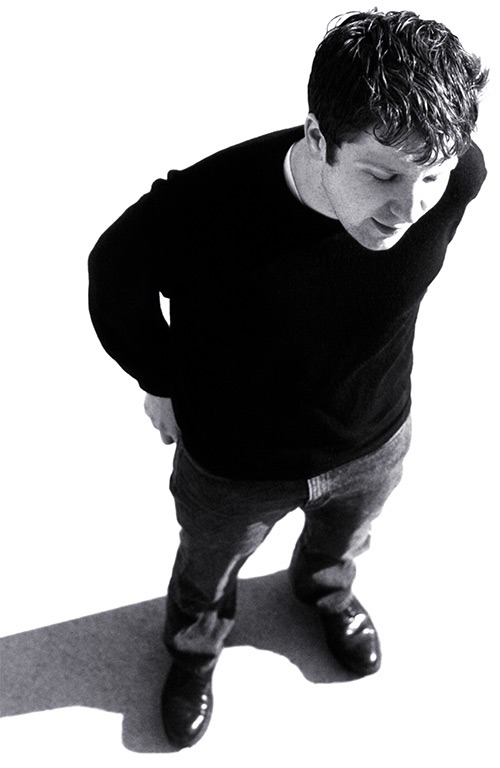 It does. It really does. Freeflowing ink pens.

What would you make a movie about?

Lately I would say I’m thinking I would make a movie about… you know I was really caught by surprise by that movie Go. Wherein thinking it was going to be a real stinker…

…and it turned out to be real funny. And that sort of suburban drug use and “make party” atmosphere is pretty entertaining for me. So I think I would probably make something like that.Yeah, I was real surprised by that movie.

Incorporating suburbanites trying to enjoy their lives via party making and a little substance abuse here and there.

What is your favorite type of animal cruelty?

Favorite type of animal cruelty would be… I’d like to see a lot more branding, but with taggers branding animals. Because branding is, you know, functional. And I think they could take it to the next degree and get some of these guys with the rat tails to go around and brand their tag on cows. [laughter] Could take it to a whole new art form. That would be one of ’em. There was a time I saw a monkey getting its head beat inthe Faces of Death I video. It’s pretty disgusting and disturbing, but I suppose if it wasn’t a cute – or as cute – animal… [laughter] …it might have been more enjoyable. [laughter]

Have you ever seen a set of salt and pepper shakers that really made an impression on you?

Have you ever been sailing?

Tell me about your family.

My sister – my only sibling – is twenty… uh, twenty-four. Will be twenty-five in April. Lives in Washington, DC. Works for an international security company, sort of the CIA-type of employment. Nice girl.

An independent security company, they just started their own CIA?

No, it’s subcontracted through them. She might actually be working for the CIA in two months… background checks… but, so she’s twenty-four, lives in downtown DC. My father is a Czech, born and raised. Moved to the US to marry my mother when he was twenty-seven. And my mother is an Ohio girl herself. She’s very nice. She’s a French teacher at the high school. Very nice parents. I like them a lot. Very nice sister. Really nice.

Does your dad have an occupation?

Oh yeah, I’m sorry. My dad works for a company called Glass Tech, and he’s in Europe probably half of the year.