When interviewed for K Composite in 1992, Layla Smith was described as: “a 19-year-old Collegiate graduate and a UofL drop-out who goes to punk shows and through some strange twist of fate became one of the five 1992 Kentucky Derby Festival Princesses. Early this year she had reconstructive knee surgery and couldn’t bend her right leg for over a month.

She is known by many names: Larry, Sasquatch, Leigh, Stupid Fucking Bitch, and Ler, to name a few. What you think about her is your first mistake. Here’s a slice of what going on in her head… and yes, she was named after the song.”

Her friend Carrie Osborne was interviewed in the same issue.

EXPLAIN WHO CARRIE OSBORNE IS.

The short girl with the fake blonde hair, no, this is the only girl I know that has to dye the color of her hair to go along with her intelligence level. She’s so stupid that she should be a blonde, so she had to dye her hair blonde to go along with it. That is Carrie… but she is also my best friend, so I can’t make fun of her. Or actually, I have only one reason to make fun of her because of… my ex-roommate. 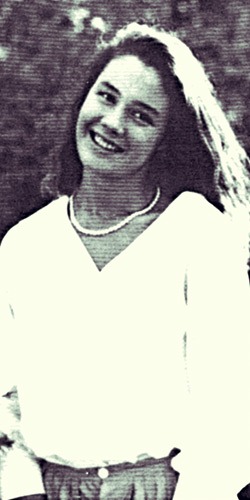 WHAT GOOD AFFECT HAS TELEVISION HAD ON YOUR LIFE?

It had a great affect on me when I had cable, but I can’t afford my cable bill so it’s been turned off. So now it doesn’t affect me anymore.

WHAT GOOD AFFECT DID IT HAVE?

What good affect did it have on me? Watching my soap opera, and seeing myself on TV. [laughter] I’m just kidding. I’m gonna make everyone think that I’m a snobby, self-centered….

EVERYTHING YOU SAY WILL BE PRINTED.

No. Please don’t print everything I say, because everyone will know who I am.

ARE YOU A GOOD PERSON?

If I wasn’t a good person you wouldn’t interview me. [laughs]

WHY DO YOU SMOKE?

Because I quit. Because smoking is a stupid, gross, and disgusting habit that I did for six years. And it was stupid because it made my breath smell and it made me cough. And now I don’t stink anymore, and now I don’t waste two bucks every other day.

WHAT’S THE COOLEST THING YOU EVER STOLE AND WHY DID YOU STEAL IT?

Okay! This is the best story! The coolest thing I ever stole was when I was 9 years old and I wanted… actually I was like six years old. I wanted this dress because it had this blue satin ribbon around the waist, and my mom wouldn’t let me have it. So I pulled the dress inside the dress rack and climbed in the middle of the dress rack and pulled the ribbon off and sat there and rolled it up into a little ball. And I put it back in my pocket and I left. And when we were in the car I sat in the back seat because I was so scared. In the middle of the drive I showed my mom, I go, “Look what I stole!” I told her, well, I didn’t say “steal,” but I showed her and she got so-o-o pissed at me and told me I had to take it back the next day. But the place burned down and I had to live….

[laughter] I had to live with this horrible feeling that I had stolen something from this poor woman and never could take it back because her whole place burned down. And I just wanted to take her this ribbon and be like, “I’m so sorry”. It was the worst. It was the worst experience… Thank you for bringing up such a horrible childhood memory.