While working at The Gap in 1999, Kley Welsh stopped by the K Composite office in downtown Louisville to be subjected to the third degree. He was interviewed by Mark Brickey and photographed by Scott Ritcher.

HAVE YOU EVER BOUGHT ANYTHING FROM A TELEMARKETER?

SO WHAT’S UP WITH THIS MP3 THING? WHAT DOES AN MP3 LOOK LIKE? 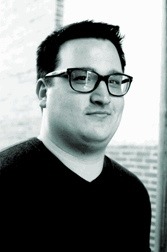 It doesn’t have a physical… It’s not tangible. MP3’s just rule, because I can get all the stupid songs that I like. Like some Backstreet Boys songs, or that stupid Christina Aguilera song, or any stupid song that I like without buying the CD. It just rules. And you know because I make you CD’s. [laughter]

IF THERE WERE A TV SHOW ABOUT YOUR LIFE, WHO WOULD PLAY YOU?

I would have to say probably… That’s tough. I would like to say either Ed Norton or Regis Philbin.

WHAT ABOUT TOM GREENE’S SIDEKICK?

I’ve heard that before but I’m just not into it.

YOU GUYS LOOK AND ACT A LOT ALIKE!

I’ve heard Drew Carey and an oversized Buddy Holly. All of those.

TELL ME A JOKE.

TELL ME ABOUT ALL THE DIFFERENT PLACES YOU’VE LIVED.

Jesus. Well, obviously I lived in Virginia, but since then I’ve lived in Louisville, Cincinnati, Chicago, and several places in Louisville on my “Kley Welsh’s College Experiment.” [laughs]

WHAT ABOUT YOUR FAMILY, WHAT’S THEIR STORY?

My father is an attorney. My mother is a teacher-slash-she works with refugees now. My sister is in school in Colorado. My father is pretty much a jokester. He’s been known to tell a few stories about some raincoats.

A few long stories, but all in all, a good guy. As well as my family.

WHAT KIND OF MOVIES DO YOU LIKE TO RENT?

Hmm. Pretty stupid ones. I like, you know, those dumb comedies. I also like those real artsy and intelligent type.

MAYBE PICK A COUPLE TITLES THAT YOU COULD SUGGEST TO OUR READERS.

Definitely would not suggest the stupidest movie in the world called Money Talks. Unfortunately, I saw that one time. Part of it, anyway. Let’s see, the last couple movies… Actually I have to rent a movie tonight. I have to rent The Lion King. So I don’t know about that one yet. Movies I’ve rented? Always a classic, Back To the Beach. [laughter] Always a classic. It rules. Then there’s… I don’t know. Back To the Beach.

WHAT IS THE HIGHEST TELEPHONE BILL YOU’VE EVER HAD?

WHO IS YOUR LONG DISTANCE COMPANY AND WHY?

Probably AT&T because I didn’t really care that much. They were just the first one that called.

EXPLAIN A FAX MACHINE AS IF TO SOMEONE WHO HAS NO IDEA WHAT IT IS.

A fax machine is an apparatus that you put a document or a piece of paper into, and it magically appears at another apparatus.

SO THERE’S A LITTLE BIT OF MAGIC INVOLVED?

It’s all about magic.

IF YOU HAD TO ENLIST IN THE ARMED FORCES, WHICH BRANCH WOULD YOU PICK, AND WHY?

If I had to enlist… Why do I have to enlist?

BECAUSE IT’S JUST A HYPOTHETICAL QUESTION.

It would have to be probably the Navy Seals, because I’m such a bad ass. [laughter]

LIST ALL THE NICKNAMES YOU’VE HAD AND WHY YOU’VE BEEN CALLED THAT.

All the nicknames. Well, Kley is obviously a nickname because that’s part of my middle name. After that, there was a nickname in high school. I was called Big Daddy. One of my friends made that up. Or rather, started calling me that. Obviously I guess that was because I was bigger than most. They said something about the caddy.

The caddy being my belly. [laughs] Then, as of recent, I’ve been called the Hawk, because of my mighty wingspan, and how I like to admire it. [laughing]