It’s pretty unreal how much Jenny Elsa Wilhelmina Levallius does for other people. Her co-workers, friends and family can certainly attest to her generous nature.

Her passion for helping people she cares about is only surpassed by her love of magazine design, which she has worked with most of her adult life. Almost immediately after she made the transition to designing magazines for the iPad in 2010, she told me she couldn’t imagine going back to print. She will easily be one of the first people in the world to have their 10,000 hours of experience in interactive magazine design.

I met her in 2009 through our mutual friend Sofia Talvik [K Composite 14]. While helping me meet new people and start my life in a new country, she introduced me to the people who taught me to do the same amazing type of work that she does, and for more than a year I’ve been sitting next to her everyday, pointing, clicking and laughing.

Jenny will do pretty much anything for you, except let you take her picture. 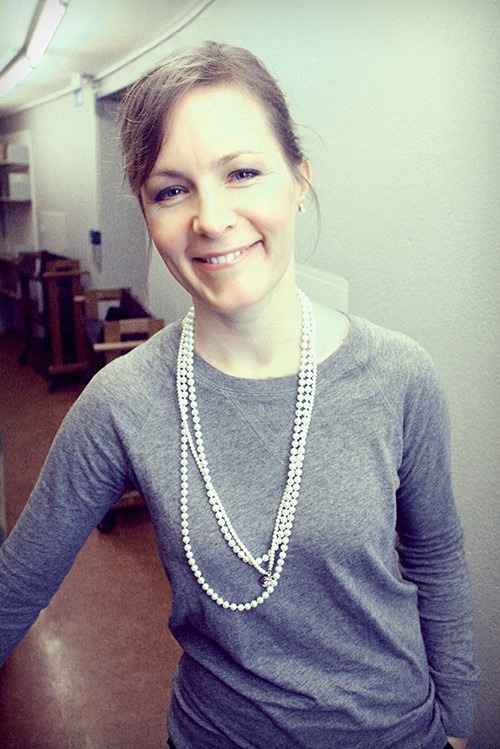 What was the first magazine you ever remember buying?

American Vogue, December 1986 at the NK department store in Malmö… A magical moment which had a life-altering effect on me. It opened up a whole new, exciting, entertaining and glamorous world, one I wanted to be part of, but I wasn’t sure then how or in what way. It turned out to be magazine design, and an insatiable desire for magazine buying and reading. My love affair with magazines is still going strong!

Nice! Tell me about how you stand up while working at your desk. How did that start and what’s the story behind it?

It all began at my first job in Stockholm when the bosses gave us these new, fancy desks which were all the rage. They were apparently better for you than sitting down all day long which apparently is not good for the body, circulation, back, et cetera.

I started out standing up for an hour or two after lunch and now I do it almost the whole working day and much prefer it to sitting down now even outside of work!

So from now on, I will take a “stand” and demand such a desk at all future jobs… pun intended.

You lived in the US for eleven years and sometimes you talk about moving to New York. What’s so great about America?

That is a question to which my answer could fill up many a Mag+ vertical! [That’s design-talk for the type of iPad magazine layout you’re reading right now.]

It is of course a huge country full of contrasts, contradictions and extremes so it’s hard to generalize. But in a nutshell, for me, it basically comes down to the fact that I feel so at home there and I have since I first set foot on US soil – sunny southern California to be more specific – at the age of six. I feel like the best version of myself when I’m there, in every way. Being a shy, reserved Swede, I really like how much more open I feel there.

I love countless little things and a lot of big things about that melting pot of a country, from the general openness, friendliness and smalltalk between strangers to the fact that it is the land of possibility, where anyone – potentially – can make their dreams come true… Many of my hopes and dreams came true during my years of living there.

It’s so weird to hear that from someone who isn’t American. [laughs] Maybe some of it’s true! [laughter] What’s the worst movie you’ve ever seen?

Probably one I didn’t finish and have managed to block from my memory, so don’t know if that counts. [laughter] But one I wish I could erase from having seen is The Changeling. I had nightmares for days after seeing that one.

[laughs] How do people usually react when they find out that you are left-handed?

No ones cares in the slightest about it except for the person interviewing me right now [laughter] who seemed quite shocked when he found out – for some reason unknown to me [laughs]… If people except for you have any reaction to it at all, they usually think it’s a cool trait, which it totally is! [laughter] Who wants to be a “righty” like almost everyone else on the planet?

Jesus, lady! [laughter] My apologies! What are some of your secret hopes and dreams that you have written down in your tiny, pink Moleskine books?

Oh, so you’re saying K Composite readers aren’t your closest friends? [laughs] What are you going to be like when you’re really old?

I hope to be a cool, stylish, old lady who loves life and the people in it. Someone who is still adventurous, open, positive, warm, grateful, healthy, happy and a dog-owner – at last – who’s learned to worry much less, isn’t afraid of taking risks, emotional or other kinds, who lives life to the fullest and who doesn’t let fear dictate my decisions.

Have you ever touched a bird?

Not to my recollection, but then again I’m known for not having the best memory as my dear friend Sofia [Talvik, K Composite 14] can attest to.

Is it a pain in the ass to plan to do things with me because I always forget stuff?

[laughter] Well, I have to admit that planning things with you can have its frustrating moments, but they’re always worth it. I hope this answer won’t encourage future forgetfulness episodes!

[laughter] Seriously, what are some of the secrets you write down in your pink Moleskin notebooks? I’ll be happy if you tell me just one.

Okay, since you persist in asking me this question, I’ll give you one secret: One of my New Year’s resolutions for 2011 was to try to be more open, but I don’t think I’ve succeeded very well with that resolution. but then again, the year’s not over yet! There. Happy now Mr. Nosy? [laughter]