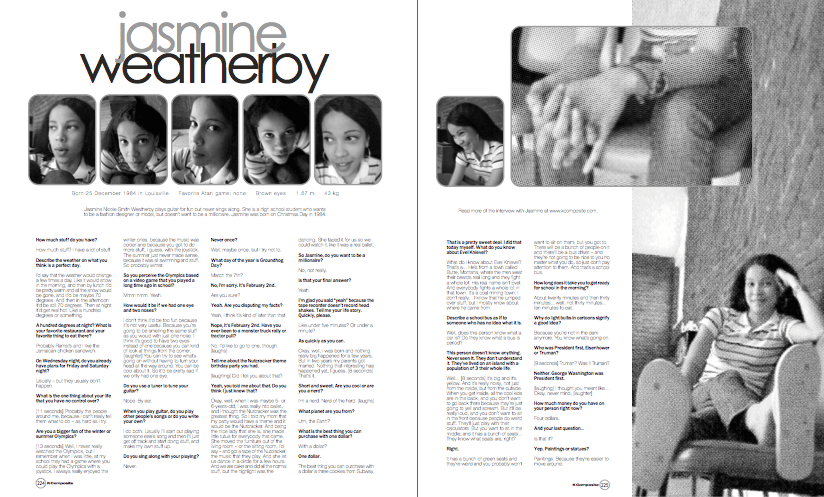 Jasmine Weatherby was interviewed for K Composite in 2000 by Mark Brickey. At the time she said she enjoyed playing guitar for fun but never sang along. As a high school student, she wanted to be a fashion designer or model, but not a millionaire. Jasmine was born on Christmas Day in 1984.

Have you ever been in a car that overheated or ran out of gas?

All the time? Whose car? 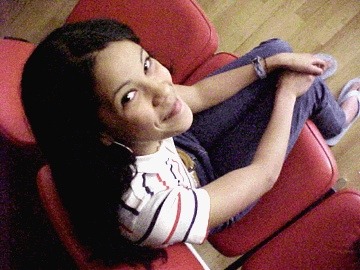 Have you ever driven a car?

Great. What are you going to be when you grow up?

Well, I’m going to be grown. Maybe a designer or a model. I don’t know. Those seem like they’d be a lot of fun.

What would you design?

Where do you do most of your shopping?

What exactly is “go time”?

[20 seconds] “Go time” is about two hours before you actually leave, depending on who you go with.

What is the meanest thing a boy has ever done to you?

[27 seconds] Probably the meanest thing a boy’s ever done to me was peed on me. [laughs] That was a long time ago and I’m not sure what I did to him, but he peed on me.

No, no, at school. At kindergarten.

He just peed on you?

I walked into the bathroom and he peed on me.

Are you a good speller?

How much stuff do you have?

How much stuff? I have a lot of stuff.

Describe the weather on what you think is a perfect day.

I’d say that the weather would change a few times a day. Like it would snow in the morning, and then by lunch it’d be pretty warm and all the snow would be gone, and it’d be maybe 70 degrees. And then in the afternoon it’d be still 70 degrees. Then at night it’d get real hot. Like a hundred degrees or something.

Probably Ramsi’s and I like the Jamaican chicken sandwich.

On Wednesday night, do you already have plans for Friday and Saturday night?

Usually – but they usually don’t happen.

What is the one thing about your life that you have no control over?

[11 seconds] Probably the people around me, because I can’t really tell them what to do – as hard as I try.

Are you a bigger fan of the winter or summer Olympics?

[13 seconds] Well, I never really watched the Olympics, but I remember when I was little, at my
school they had a game where you could play the Olympics with a joystick. I always really enjoyed the winter ones, because the music was cooler and because you got to do more stuff, I guess, with the joystick. The summer just never made sense, because it was all swimming and stuff. So probably winter.

So you perceive the Olympics based on a video game that you played a long time ago in school?

How would it be if we had one eye and two noses?

I don’t think it’d be too fun because it’s not very useful. Because you’re going to be smelling the same stuff as you would with just one nose. I think it’s good to have two eyes instead of one because you can kind of look at things from the corner. [laughter] You can try to see what’s going on without having to turn your head all the way around. You can be cool about it. So it’d be pretty sad if we only had one eye.

Do you use a tuner to tune your guitar?

When you play guitar, do you play other people’s songs or do you write your own?

I do both. Usually I’ll start out playing someone else’s song and then I’ll just
get off track and start doing stuff, and make my own stuff up.

Do you sing along with your playing?

Well, maybe once, but I try not to.

What day of the year is Groundhog Day?

Yeah. Are you disputing my facts?

Yeah, I think it’s kind of later than that.

Nope, it’s February 2nd. Have you ever been to a monster truck rally or tractor pull?

Tell me about the Nutcracker theme birthday party you had.

[laughing] Did I tell you about that?

Yeah, you told me about that. Do you think I just knew that?

Okay, well, when I was maybe 5- or 6-years-old, I was really into ballet, and I thought the Nutcracker was the greatest thing. So I told my mom that my party would have a theme and it would be the Nutcracker. And being the nice lady that she is, she made little tutus for everybody that came. She moved the furniture out of the living room – or the sitting room, I’d say – and got a tape of the Nutcracker, the music that they play. And she let us dance in a circle for a few hours. And we ate cake and did all the normal stuff, but the highlight was the dancing. She taped it for us so we could watch it, like it was a real ballet. 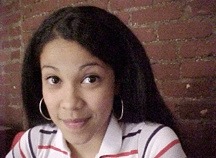 So Jasmine, do you want to be a millionaire?

Is that your final answer?

As quickly as you can.

Okay, well, I was born and nothing really big happened for a few years. But in two years my parents got married. Nothing that interesting has happened yet, I guess. [8 seconds] That’s it.

Short and sweet. Are you cool or are you a nerd?

What planet are you from?

What is the best thing you can purchase with one dollar?

The best thing you can purchase with a dollar is three cookies from Subway.

That is a pretty sweet deal. I did that today myself. What do you know about Evel Knievel?

What do I know about Evel Knievel? That’s a… He’s from a town called Butte, Montana, where the men wear their beards real long and they fight a whole lot. His real name isn’t Evel. And everybody fights a whole lot in that town. It’s a coal mining town. I don’t really… I know that he jumped over stuff, but I mostly know about where he came from.

Describe a school bus as if to someone who has no idea what it is.

This person doesn’t know anything. Never seen it. They don’t understand it. They’ve lived on an island with a population of 3 their whole life.

Well… [8 seconds] It’s big and it’s yellow. And it’s really noisy, not just from the inside, but from the outside. When you get inside, all the cool kids are in the back, and you don’t want to go back there because they’re just going to yell and scream. But it’ll be really loud, and you don’t want to sit in the front because people do weird stuff. They’ll just play with their
calculators. But you want to sit in the middle, and it has a bunch of seats… They know what seats are, right?

It has a bunch of green seats and they’re weird and you probably won’t want to sit on them, but you got to. There will be a bunch of people on it and there’ll be a bus driver – and they’re not going to be nice to you no matter what you do, so just don’t pay attention to them. And that’s a school bus.

How long does it take you to get ready for school in the morning?

Why do light bulbs in cartoons signify a good idea?

Because you’re not in the dark anymore. You know what’s going on.

Who was President first, Eisenhower or Truman?

[9 seconds] Truman? Was it Truman?

Neither. George Washington was President first.

[laughing] I thought you meant like… Okay, never mind. [laughter]

How much money do you have on your person right now?

And your last question…

Paintings. Because they’re easier to move around.