I know you’re busy, so I don’t want to waste a lot of your time, but if you could spare a moment, a magical tale shall be woven here in your honor.

Way back when I was 21, I wasn’t engaged. Hell, I wasn’t even engaged in college studies. But I know a riveting story about some sweet, young thing who was engaged to be wed. Engaged to the president of the United States, no less. And get this: she was real easy on the eyes.

May I present Frances Clara Folsom?

The sexy co-ed of whom I speak was from the titillatingly luscious town of Buffalo, New York, and went by the name of Frances Folsom. When she was born, in 1864 (editor’s note: a long time ago), her father’s law partner purchased a smartly-appointed perambulator for the newborn. Perambulator – that’s old timey talk for a baby carriage. See, you’re already learning shit. And it gets better. 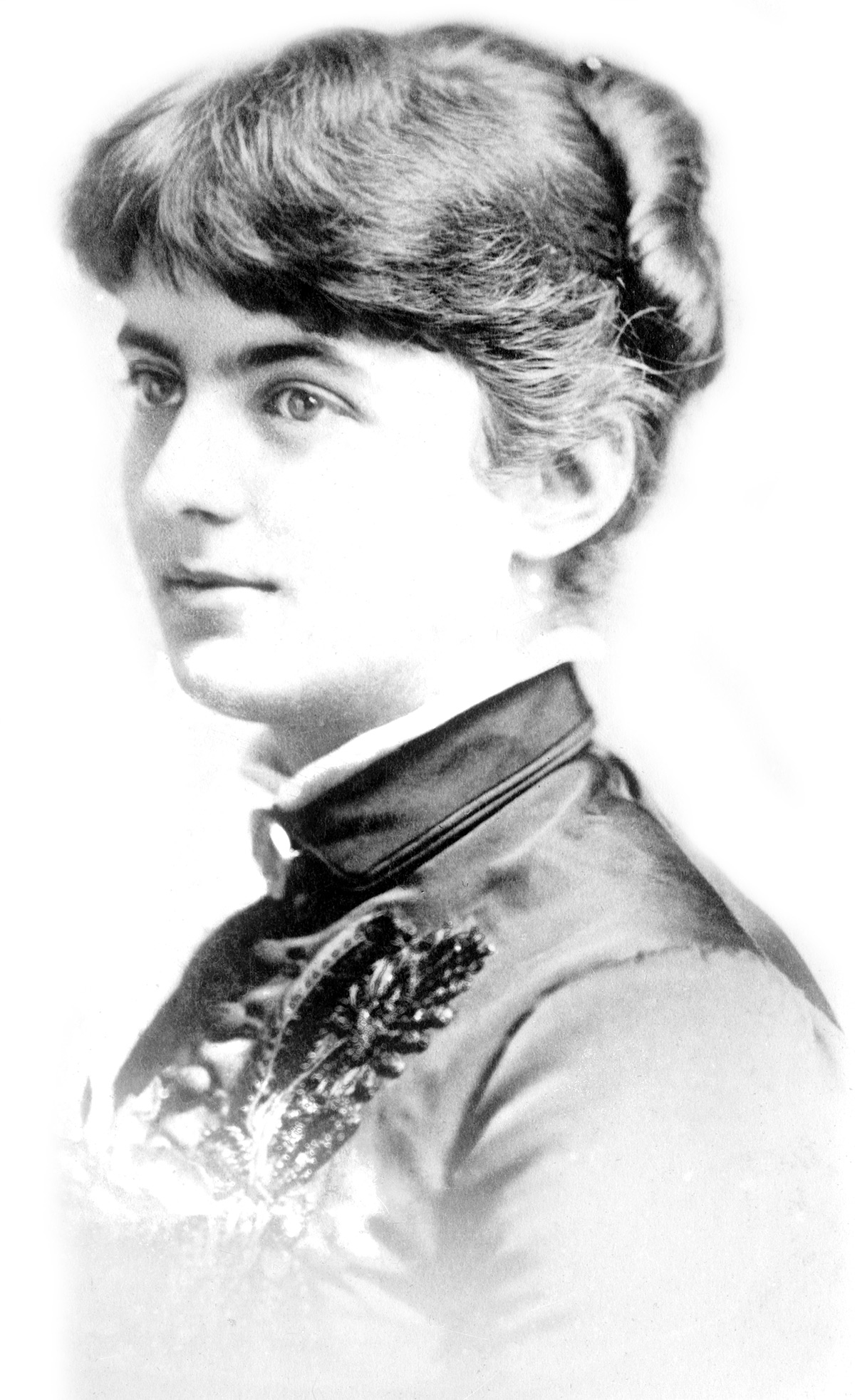 Sadly, it wasn’t too long before her litigious father was killed in a grisly accident. That left young Frances as the ward of a single mother. But her dad’s buddy – the one who bought that perambulator I was talking about – turned out to be a proper gentleman. He stepped up and became the kid’s unofficial guardian as well as the mother’s substitute baby daddy.

This fellow enjoyed hunting, fishing, playing poker, chatting up the locals, and patronizing the area’s watering holes with his bros, who all called him “Big Steve.”

You’d think he’d be a real cultivated guy, being a lawyer and all, but he almost never traveled anywhere or read anything. No fiction, no poetry, nothin’. He didn’t even like listening to music. Oh, other than boozin’, one thing this oaf actually did enjoy was chicks whose husbands were dead.

In addition to befriending Frances’ mother, he cozied up with another idling widow by the name of Maria Halpin. Funny thing, actually. Though Maria’s husband had been pushing up daisies for quite a stretch, she somehow got pregnant. Hmmm. How does that happen?

Frances’ fake dad never publicly admitted that he had, well, sealed the deal with Maria, but for some reason he found it necessary to pay child support to her. What a generous dude! I wish I had so much damn money that I could pay child support for every immaculately conceived kid that any random broad happens to show up with.

During his succession of drinking, gambling, and phantom impregnations, this lawyer watched as Baby Frances blossomed into a comely woman. Oh my! Counselor even had a pet name for the girl. Called her “Frankie,” he did. Real cute like, see?

Frances enrolled at Wells College, and with her mother’s permission, Pops began corresponding with the lass. He was probably all like, “Hey Frankie, what’s up? How’s school? Okay, gotta run. LOL.” Dude even sent her flowers all the time. Methinks the old feller may have been up to something.

By the time she was in college, her faux father Big Steve had already made quite a name for himself. Over the years, he had been elected sheriff of Erie County, New York, mayor of Buffalo, and governor of the whole damn Empire State. Between his political career and sending floral arrangements to college girls, he hardly had time to truly fall in love. Or did he?

Shit. At this point, maybe I should tell you his name. When he wasn’t being called Big Steve, his proper name was even more ridiculous. They called him Grover. That’s right, a grown man named Grover – Grover Cleveland to be precise. Kind of a big deal. If you want to see what he looks like, just pull a one thousand dollar bill out of your pocket. That’s his picture on it. What? Don’t have a thousand dollar bill on ya at the moment? No wonder you’re getting your history lessons from free magazines. Loser.

Anyway, Frances’ fake dad, Grover Cleveland, continued his rise to prominence and ultimately became president of the United States in 1885.

In addition to money and power, the Democrat attorney had also amassed quite a bit of age and girth. At the frisky age of 49 he had more than just years under his belt. He was, as they say, pleasantly plump. I think you catch my drift. Dude was enormous. This buffet hero weighed in at 280 pounds and was undoubtedly the biggest, most eligible bachelor in the country. Historians and other freaks have calculated his body mass index to be 34.6, the second thickest commander-in-chief behind William Howard Taft (and believe me, “on a list” is about the only way you would want to be behind William Howard Taft).

After Cleveland took office, Frankie and her mom were invited to visit the new president at the White House. He probably drooled all over her like she was some delicious crumpet. I mean, people ate crumpets’n’shit back then, right?

About a year and a half after becoming the most powerful bloke around – and letting his crush on Frankie fester and ferment since, oh, around the time the kid was born – Grover finally had the cajones he needed to pop the question. He asked the spry Frances Folsom to become his child bride.

Despite their 27-year age difference, she gleefully accepted his proposal. She was probably all like, “Yeah, I guess.” I’m only insinuating that she was unenthusiastic, but it’s just because I’m jealous. She really did like him quite a bit, in a Woody Allen kind of way.

They were married at the White House in June of 1886. Except for a few times in movies, this was the only time a president got married while in office. Movies aren’t real, though, so they don’t count.

The public was delighted with the new first lady. They loved her freshness, charisma, and charm. Plus, they finally had something to look at instead of that walrus. That Frances Folsom was one piece of ace! The president knows from experience, dude, if you know what I mean. Him and her got it on.

It was such common knowledge that she was so friggin’ delightful that, on occasion, her majesty’s reputation fell victim to witty reparté. One of Grover’s political adversaries was reported to have quipped, “I detest him so much that I don’t even think his wife is beautiful.” I actually found that quote on the White House website, so it might not be true. Regardless, it’s a pretty good burn.

Most portrait photographs of Frances seem to indicate that she thought it was kind of funny to sit for the camera. She always seems to be a little bit bored or amused, or both. Either way, her charm and twinkle shine through the old black and white photos.

Later, guys …and we’re back!

Grover and Frances reveled life on Pennsylvania Avenue, but he unfortunately lost his re-election bid to Benjamin Harrison in 1888. (Well, actually, he won the popular vote but got fewer electoral votes. Thank heavens nothing so abominable could ever happen in modern times!)

When leaving office, Frances announced to the media (“the papers”) that they would soon return. Grover had become known for low tariffs and fiscal responsibility, but after the Clevelands departed, the new Republican president ran up the budget and produced mountains of what was called “activist legislation.”

Four years after being voted out, Grover ran again and was easily elected. That made him the first and only president to serve two non-consecutive terms. That year, Congress was also swept by his fellow Democrats.

Between their two terms, the Clevelands gave birth to their first child, Ruth. The nation was endeared to “Baby Ruth” and watched her grow until she tragically died of diphtheria at age 12. Gross.

Nearly twenty years later, the Curtiss Candy Company claimed their Baby Ruth candy bar was named for her when they were sued by the baseball player Babe Ruth. Lame story, Curtiss, but it worked. They really tapped into how everyone loves candy bars named after dead kids.

When the Clevelands’ time in Washington ended in 1897, they moved to Princeton, New Jersey, where Big Steve resumed practicing law. About nine years later, the big fella expired. Frances was at his side and heard him utter his final words, “I have tried so hard to do the right…” and with that, he passed. Um, the right what? You there? Grover? Shit.

Including Baby Ruth, they had five kids who mostly lived really long lives. The last one kicked the bucket in 1995. Yeah, that guy was really old.

As the former prez became worm food, Frances was squired by a more age-appropriate suitor, the Princeton archaeology professor Thomas Preston, Jr. He was two years older than her. They married about five years after Grover’s passing. She eventually outlived Grover by 39 years, living until 1947. Preston died in 1955.

Now you know all about how the beautiful, young Frances Folsom married the president way back in 1886. Fucking finally, you have something to talk about at the water cooler. Please do not share this on social media, just show it to somebody or maybe talk to people for a change. The end.

This article first appeared in Issue 13 of K Composite Magazine.