You can’t talk about Emma Helen “Rager” Pettersson without talking about the music that fuels her life. There is always music playing when she’s around and most of it is heavy and loud.

Emma is always singing a song or looking forward to a concert. She has worked in the music business as long as I have known her – as a concert promoter, a lighting technician and a stage manager.

Aside from the music in her veins, there’s another side to my friend Emma that is completely ridiculous. She always makes me laugh, especially when she is threatening to murder me. Perhaps it’s her way of saying she cares. Quite often we use the word “bitch” in place of each other’s names. Maybe she’ll surprise me by actually stabbing me in the face one day.

We don’t live in the same city, but our visits are always memorable for the adventures they include, most of which are based around food, drink, travel and rock’n’roll.

Emma lives in the southern Swedish city of Malmö from which you can see Copenhagen, Denmark, across the water on a clear day. We sat down there for a heart-to-heart one sunny Sunday morning after a long night of raging. 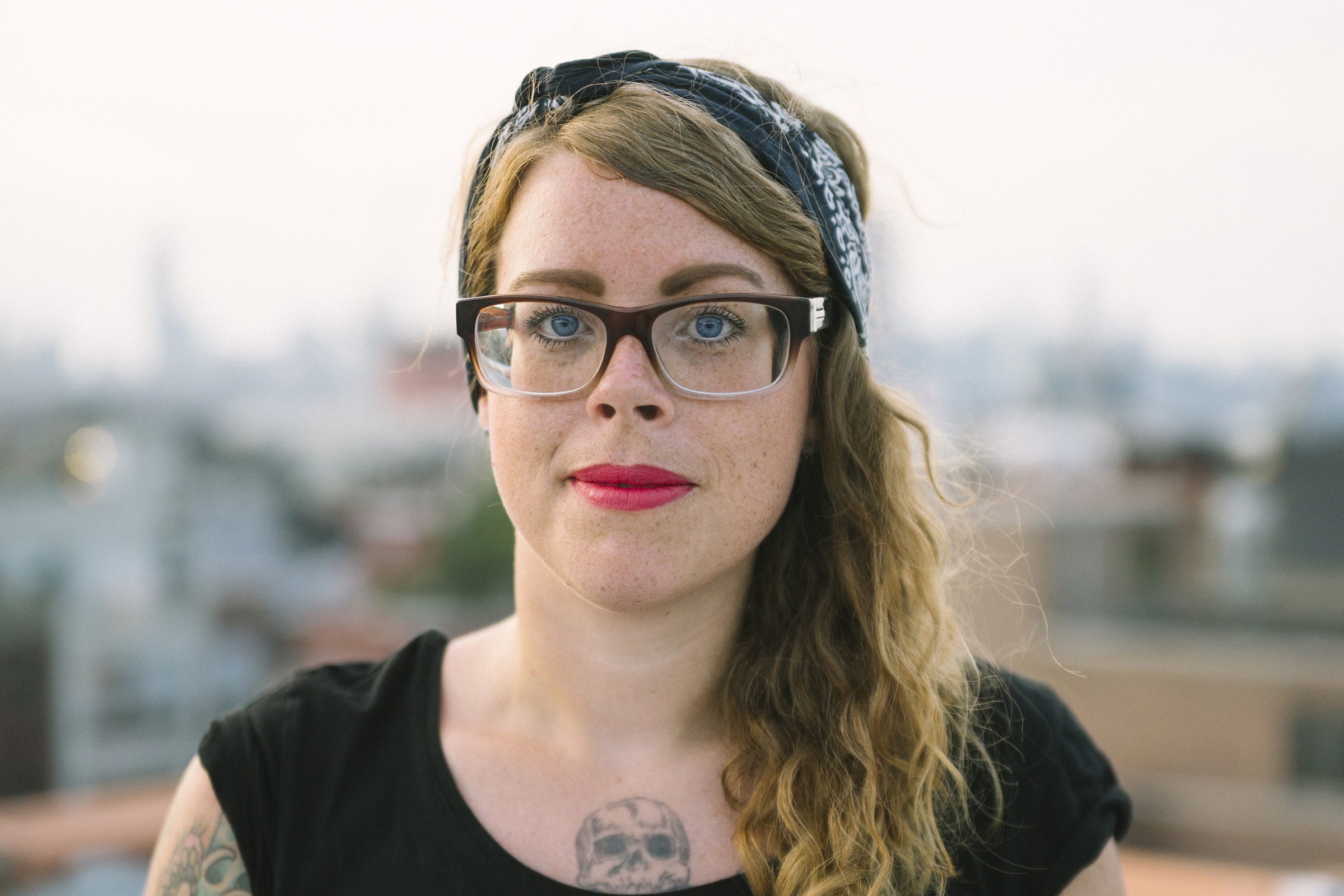 I know it’s hard to choose because there are six of them – and they’re all great – but what is your favorite Fast & Furious movie?

What happens in that one?

They drive really fast and they are being really super furious. [laughter]

I almost believe that you’ve seen it! [laughter]

(Emma laughs while taking a drink of coffee)

How does that coffee taste in your nose?

[laughter] Much better in my nose than in my mouth! [laughter]

Maybe we should go back to the coffee shop and tell them they should serve it into people’s noses?

Yeah. No one does that anymore.

Have you had a lot of different jobs?

What are you doing now?

I am a stage manager at a concert and dance hall.

I go around being the boss. [laughter] No, I have contact with the artists that are coming to our hall. They tell me in advance what they need and I tell them, “Oh, we’ve got that and that.” And if we don’t have it then I can get it for them. I arrange everything for the night of the show or performance.

Then I’m in charge of the stage, the security and everything else for the performance. I make sure everything is on time and I ring the bell for the audience to come in – [laughs] which is a big responsibility!

Are there lots of famous people who perform there?

Have you met some famous people?

I met Henry Rollins! I was almost crying. [laughs] Sir George Martin, too… It’s hard to remember, but those are my two favorite ones.

Did you ever meet Chewbacca?

Did he ever play here?

Actually, my brother’s nickname for me is Chewbacca! [laughter] So yes! I do know Chewbacca very well! [laughter]

Chewbacca is there most nights!

Why does he call you that?

Because usually when I try to answer a question I will be like this first, “umm… Duhhh… Neh… Ehh… Ehh… Rrrr…” [laughs] and then answer. 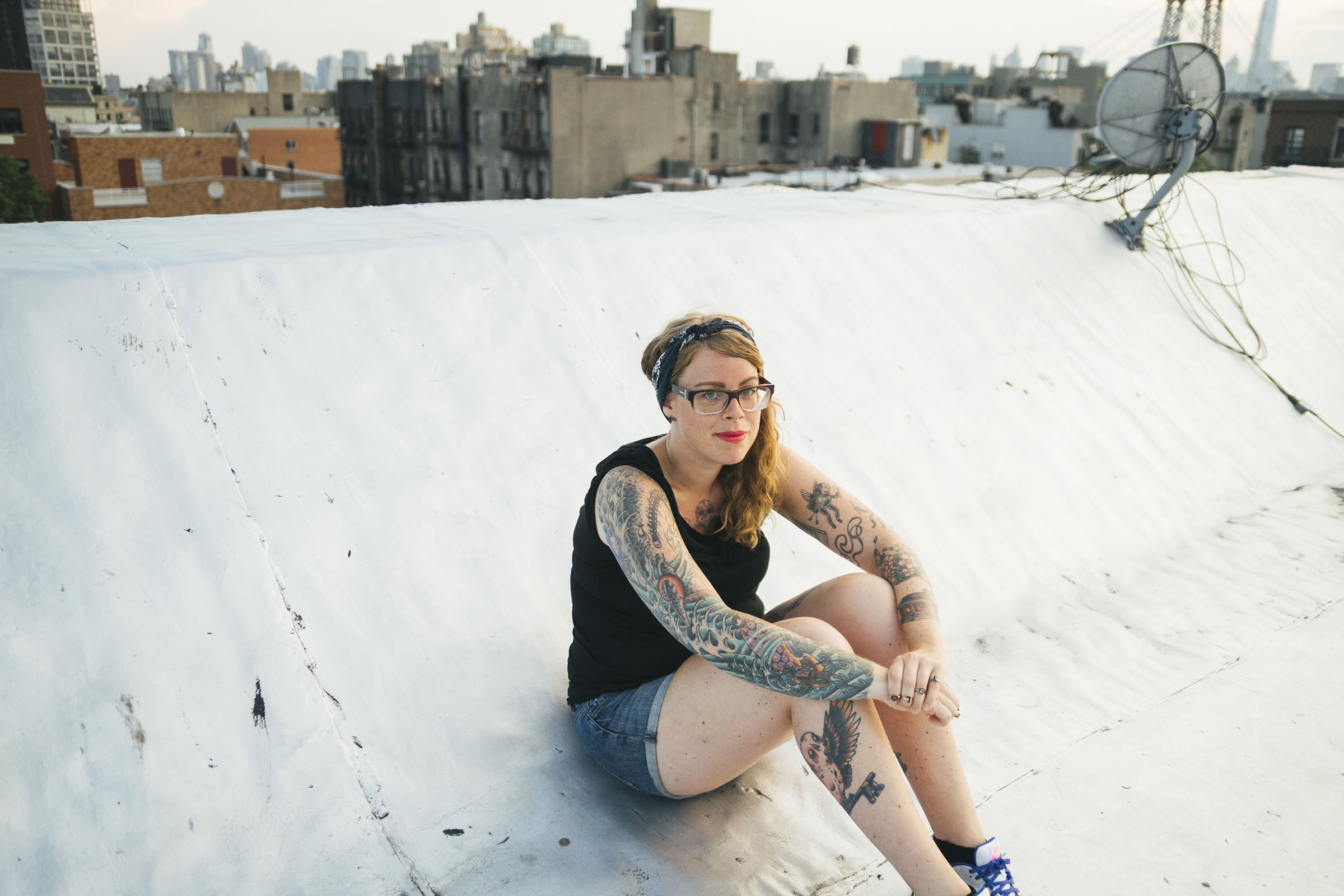 Can you make that sound for me?

[three-second pause] Do I have to choose?

Well, you are both. Obviously you’re both. But which one is more you?

Do you think other people think of you the same way?

I don’t know. What do you think? You’re another person.

There you go. You answered your own question.

But I’m not everyone else.

[laughs] No, you’re “special!” I guess people think that I’m smart as well, but they don’t really say it to my face. [laughs]

What should people know about you?

As little as possible! [laughs] That way they’ll still be friends with me.

What’s with all the tattoos?

What’s with all the not-having-a-bunch-of-tattoos? [laughter] I just love the artform. I love the idea that you can put something permanent on your body that – I hope – people think through before they do it. I just really like the aesthetics of tattoos.

Also, I got into tattoos when I was into the hardcore scene, so I’m a bit brainwashed with that image. But I didn’t get any tattoos until I really knew what I wanted. Otherwise, I would be covered in things that I thought were nice when I was 18. 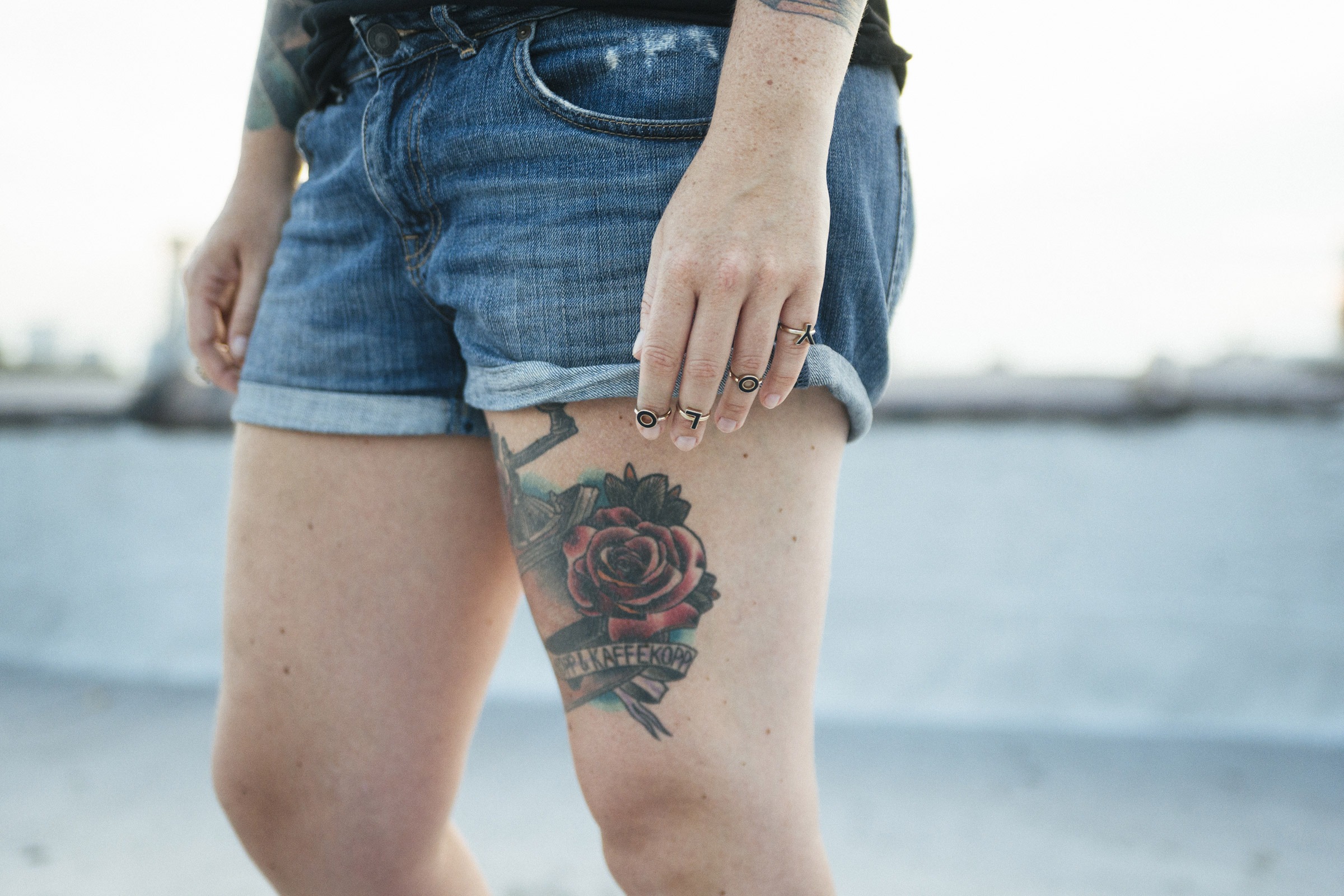 Right. I remember we talked about the fact that you don’t like seasons.

No. I only like spring and summer. I hate being cold.

You always have different eyeglasses that “define your look.”

Yes. I think so. Like, when you get new glasses it’s usually a new style and it really changes the way you look.

How do you choose?

First, I decide that I want to switch glasses, then I go to the store… And then from that day it usually takes about half a year for me to decide [laughs] which glasses I want.

Also I’ll send the picture to everyone I know, [in an annoying voice…] Is this nice? Do you love these?”

What do you look for in a pair of glasses? What characteristics or features do you like?

Recently, it’s been big glasses. I like that. I think that if you wear glasses, you should wear glasses! [laughter]

It shouldn’t be like, “Oh, I have to wear glasses so I’ll disguise the fact that I have glasses.” I really like that you can – as you said – express something with glasses that can “define” me. I look for something that I like. I guess it’s not more complicated than that.

When you’re shopping for glasses and you find some you like, does it ruin them if you see someone stupid wearing them?

How many guys have you made out with who aren’t in bands?

[much laughter] I don’t know! Not many! [laughter]

Would you say ten percent?

I see. One in twenty. [laughter]

Yeah! [laughing] I don’t know! There are a lot of musicians.

Did you decide to not make out with me anymore because I’m not in a band anymore?

I thought so. Or it was because we live in the same country now so I’m not exotic and foreign anymore. [laughter]

[long pause] Oh, do you really want an answer?

Yes! I’m not doing this for my health. I want answers.  [laughter]

Go to a therapist, dude. [laughter] 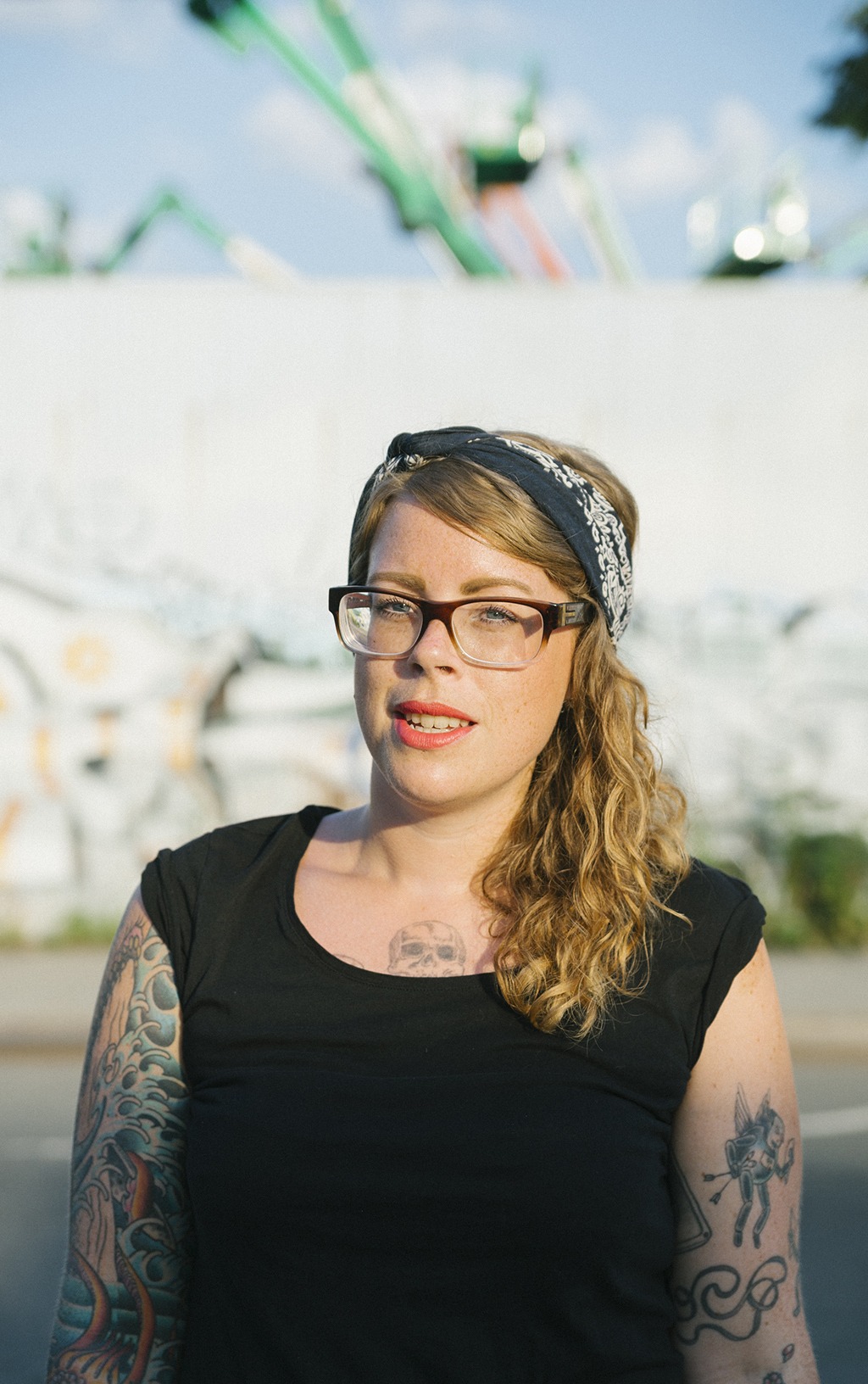 What’s the worst injury you’ve ever had?

I haven’t had any bad injuries in my life. Once I was working and I put all my weight the wrong place on my thumb and it [makes a cracking noise] cracked back the wrong way.

Then it was just dangling off my hand. It was out of place and I had to go to the hospital, but it wasn’t crazy.

Did they just pop it back in?

Yes, and I got a bandage to hold it in the right place.

So you were giving thumbs-up to everybody for a while?

[laughs] Yeah. This was a week before I was going to go on vacation to Hong Kong and Thailand, and I was like, [screaming] “Oh no! I can’t have a fucking bandage on! Oh my god, oh my god!”

But then they said I would only need to have it on for a week. So when I felt that I could support it again I didn’t need to have the bandage anymore.

Is it totally normal now?

I’m still afraid to use it to open latches and things at work where I need to use a lot of pressure, but I can move it normally.

Are you a bird that can’t be caged?

Why do you wear so much perfume?

I do? I didn’t know I wore a lot of perfume.

Oh. Then what’s that smell?

Tell me about “tro, hopp och kaffe kopp.” (Emma has a tattoo of a coffee grinder with a banner that says “faith, hope and coffee cup” in Swedish)

I wanted a coffee tattoo because I drink a lot of coffee and coffee saves my life! [laughs]

Do you usually drink your coffee black?

Yeah. No shit in it. Don’t destroy the coffee, man.

So I wanted a coffee tattoo with an old hand-cranked coffee grinder and a banner with some type of phrase on it. I was thinking a lot about “black gold.” One morning I just woke up and it hit me! “Tro, hopp och kaffe kopp!” [laughs]

It’s almost too dorky, but I like it. Now it’s forever on my leg.

That’s all the questions I have for you, my friend.

Really? I thought it was going to be more bloody than this. [laughter]