Curtis Mead is kind of a wanderer. He used to play in a band which toured America and Europe several times. After moving to Austin for a while, now he’s back living with his mother, who raised him, in his hometown of Carmel, Indiana, just outside Indianapolis.

HAVE YOU EVER GOTTEN ANYTHING COOL OUT OF A CEREAL BOX?

Cool out of a cereal box… [12 seconds] Does a… No, Cracker Jack is not cereal, unless you put milk on it.

MOST PEOPLE DON’T DO THAT.

[laughter] Anything cool out of a cereal box? Yeah, well, I don’t think it’s cool anymore. I can’t tell you what kind of cereal it is, I don’t remember, but those really cool “make your quarter disappear” magic tricks… I got one of those.

IF YOU WERE INVOLVED IN THE MAKING OF A SUMMER BLOCKBUSTER FILM, WOULD YOU PREFER TO BE THE STAR, THE DIRECTOR, OR THE WRITER? 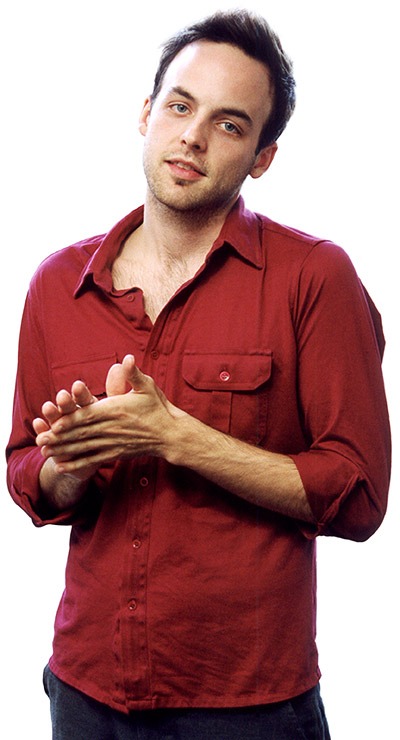 HOW OFTEN DO YOU WASH YOUR HANDS?

Well, when I’m combating my huge allergy to poison ivy, such as I am now… I’ve done it though. I wash my hands probably five times a day

HAVE YOU EVER BEEN ARRESTED?

[laughs] I’ve never been arrested. I have been handcuffed when I was 14. [laughter] I got handcuffed for being on federal property… Actually it was “federal” property, because at the time it was the Pan Am Games and the ping-pong championships were being held at this place in Carmel, Indiana.

A friend of mine and I snuck out, wearing all black, of course. We crossed a field and all of a sudden a K9 trooper came out from behind a tree and asked us what we were doing, blah, blah, blah. They handcuffed us.

I think they were just trying to scare us more than anything. But they put us in a holding cell and I had to call my mom, and augh… but, [laughs] it wasn’t anything foreign to my family because my brother had visited the cell – the clinker – quite a few times. [laughter] So, just being held up for a curfew violation was not a top priority.

DO YOU THINK EVEL KNEIVEL HAS EVER CRIED AT A MOVIE?

[laughter] Um, I’d go with… Evel Kneivel, gosh. What movies would he have cried at? Probably no. No. I don’t think so.

He’s a tough individual. Is he from here?

I DON’T KNOW. PROBABLY ARIZONA OR SOMETHING. CALIFORNIA? SOMEWHERE AROUND THE SNAKE RIVER CANYON. DO YOU HAVE ANY PRE-SCHEDULED RITUALS THAT YOU LIKE TO DO EVERY WEEK?

Every week? A weekly ritual? Yeah, I like to watch TV once or twice a week. What do I like to do weekly? [eight seconds] I like to take my dog to the park, which I don’t get to do every week, but I’d like to.

My dog’s name is, um… Smoky. [laughter] I voted for Fatty and Shithead.

AS A STEVE MARTIN FAN, I CAN REALLY APPRECIATE SHITHEAD.