While putting the finishing touches on the new “Quick Guide” video for K Composite’s iPad magazine tonight, I took a break to fix some dinner.

Usually around this time, if I want to have a drink with dinner, I’ll have a beer or a bourbon and Coke. However, tonight I found that my supplies of both had been depleted. This was obviously the work of some phantom drunk who lives in my apartment.

Luckily, I’m moving to a new place in two weeks, so I won’t have to worry about him haunting me anymore. That is, unless he follows me wherever I live, which has unfortunately been the case for the past couple months, I mean years, I mean decades.

Instead of my usual go-to beverages, I decided to play bartender and whip up a proper gentleman’s cocktail. (You know, in case a gentleman happens to stop by.)

To accomplish this, I reached for a bottle of Drambuie’s latest creation, Drambuie 15. I had picked up this bottle and some other Drambuie supplies recently at a press event here in Stockholm.

As an elite member of the Stockholm media specializing in food and drinks – I’m the publisher of a magazine that has almost nothing to do with either – I was joined by about twenty of my alleged colleagues while a Scottish bloke name Bruce from Drambuie walked us through some quick and dirty recipes. All of them were delicious.

Drambuie is – according to my most reliable anonymous source (Wikipedia) – “a sweet, golden colored 40% ABV (80-proof) liqueur made from malt whiskey, honey, herbs, and spices.”

It’s basically a very mixable beverage that is really easy to drink and results in cocktails that don’t taste too much like alcohol. Perfect for high school kids.

If you’re familiar with the product, you might not recognize it these days. They recently redesigned the packaging.

If the goal was to take a memorable and unique bottle you remember from hotel bars and grandparents’ house and make it look more boring, generic and to blend in with everything on the shelf, they hit a home run.

The three cocktails we mixed were essentially Drambuie versions of famous drinks that you wouldn’t ordinarily think of as being something in which you’d use a Scottish whiskey-based liqueur as a main element.

These drinks were variations on the cosmopolitan, the margarita and (gasp!) the mint julep. As a native of Louisville, home of the Kentucky Derby which made the mint julep famous, you better believe I voiced my strong objections to this.

Surprisingly, all three drinks were pretty damn good and they made short work of destroying my faculties. Yes, even the Drambuie mint julep, sacrilegious as it may be, was in fact, sacrilicious. Truth be told, they called it a Honey Apple Julep.

None of the drinks were purported to be replacements for the classics upon which they were based, however, all of them were excellent changes of pace and could be fun substitutions for the same tired old drinks. That’s kind of what I was thinking tonight as my bourbon supply was empty.

With that in mind – and the foggy memories of having way too much fun at Snickarbacken 7 where the event was held – I grabbed the Drambuie 15, a lemon, some honey, an egg, a bottle of ginger beer and a carton of orange juice. What you see here is the result, my own version of their recipe, the Extraordinary Fizz.I’m not a fan of grapefruit, that’s why I went for the orange juice instead. As mentioned, I also used the “more masculine” Drambuie 15 instead of the normal stuff.

Below you’ll find the recipe for the Extraordinary Fizz and the Apple Mint Julep.

Have fun. But don’t let me catch you with Drambuie on Derby Day. 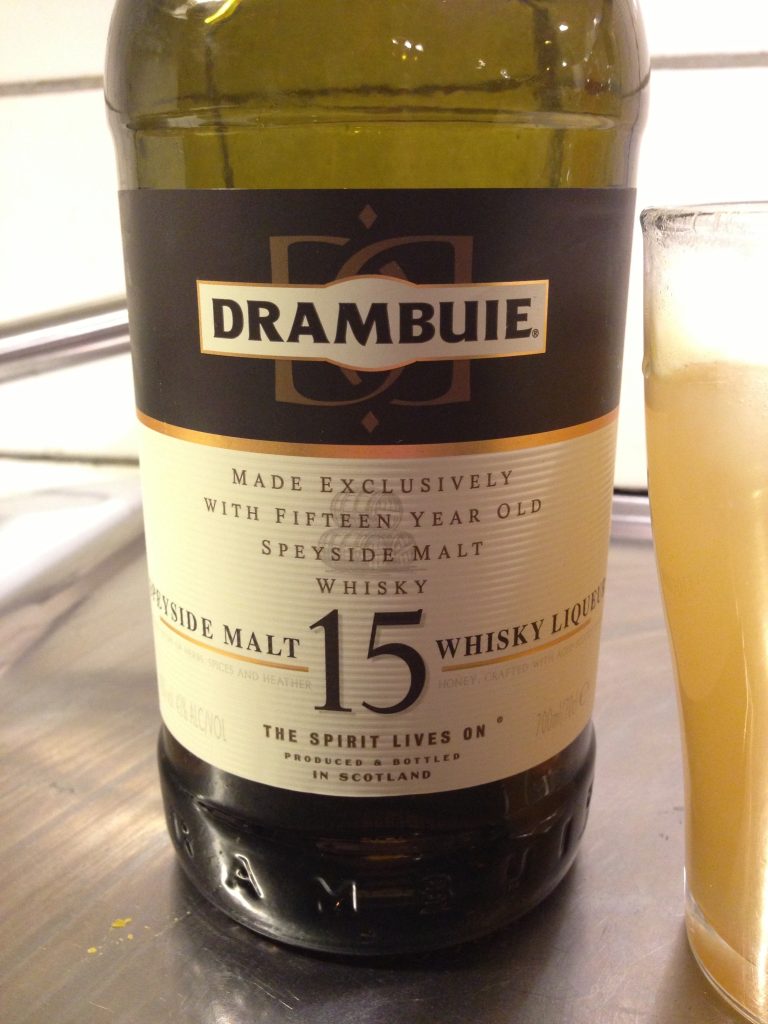 Here’s what you’ll need to make one cocktail:
50ml Drambuie (I used Drambuie 15 instead)
20ml Honey
30ml Lemon juice (about half a squeezed lemon)
20ml Grapefruit Juice (I used orange juice instead)
1 Egg White
Ginger beer
Ice (I believe this is the same as frozen water)
A shaker

Here’s how to make it:
Pour the juices, honey and egg white into the shaker.
Fill it up with as much ice as it can fit.
Shake the crap out of it and pour into a tall Collins glass or tumbler.
Top with ginger beer.
Drink it up.

Throw everything in the shaker, shake it up, then pour it in a glass and drink it.