Bill Barbot participated in this written interview for K Composite in the spring of 1992. He makes chronic, hilarious use of numbered lists and quotation marks. He was then playing in the Washington, DC, band Jawbox. The color photos that appear here are from the same era and did not appear in the original interview. 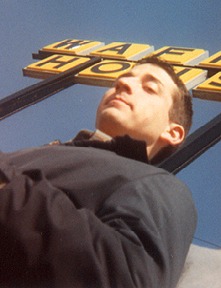 WHAT WERE YOU DOING WHEN WAR WAS DECLARED?

1. Cleaning my gun. I assume you mean World War II.

ARE YOU A KID OR A GROWN UP? AND EXPLAIN.

Grown up. You see, Scott, when a little boy hits a certain age – about your age, I’d say -his body starts going through some changes. He grows taller, his voice gets deeper, and hair starts comin’ out – well, just about all over the place. Then – well, I don’t know how to put it – well, his genitals enlarge and he ain’t a kid anymore.

WHAT DO YOU LIKE MOST ABOUT THE VILLAGE PEOPLE?

1. I heard that the “Indian Chief” was the same guy who invented “Go-Bots.” Also that he doesn’t wear underpants. 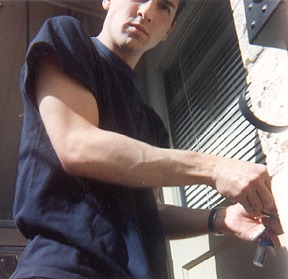 GIVE A BRIEF CHRONOLOGY OF ALL THE JOBS YOU’VE HAD AND WHY YOU DON’T WORK THERE ANYMORE.

DO YOU EVER WEAR WHITE PANTS AND IF SO, DO YOU FEEL YOU CAN GET AWAY WITH IT?

Yes, because I wear them under my other pants.

WHAT’S YOUR FAVORITE RECORD YOU’VE PLAYED ON, AND IF YOU COULD DO IT OVER WHAT WOULD YOU CHANGE?

1. “Love Gun.” I would have gone unmasked way before1982 so that “chicks” could realize how handsome I was on “Love Gun” and I would have looked a lot better on the cover of my solo LP.