Annasara Lundgren is a studied and accomplished musician whose main focus has been the violin. In 2014, her debut solo record, Annasara, was released on Purslane Records. On the record, she sings as well as plays a variety of other instruments including piano and guitar.

The seriousness of her music hides the true exuberance of her personality which is electric and engaging. She seems to takes chances to entertain herself, and one midnight on the coast of Malmö she even encouraged me to face my fear of swimming in dark water. I survived.

Recently, her physical performance ability with the violin has been hindered by internal stress as a result of years of repetitive motion. We discussed how that feels both mentally and physically, and the prospect of living without the specialty she has dedicated much of her life to perfecting.

YOU’RE A VERY ANIMATED PERSON. YOU ALWAYS SEEM TO BE PERFORMING – OR “ON” – WHEN OTHER PEOPLE ARE AROUND.

I’m a bit theatrical in my moves, maybe. But I’m not trying to put on a show [laughs] if that’s what you mean. Sometimes I’m laid back when I’m tired.

Yeah. Or when I’m in a bad mood, angry or grumpy.

I NOTICED WHEN I WAS AT YOUR PLACE A FEW WEEKS AGO, WHEN YOU WERE MAKING COFFEE, IT WAS LIKE…

Was it a show?

IT WAS A DANCE! WHEN YOU’RE HOME ALONE, JUST YOU AND YOUR CATS, DO YOU TALK TO THEM AND PERFORM FOR THEM? 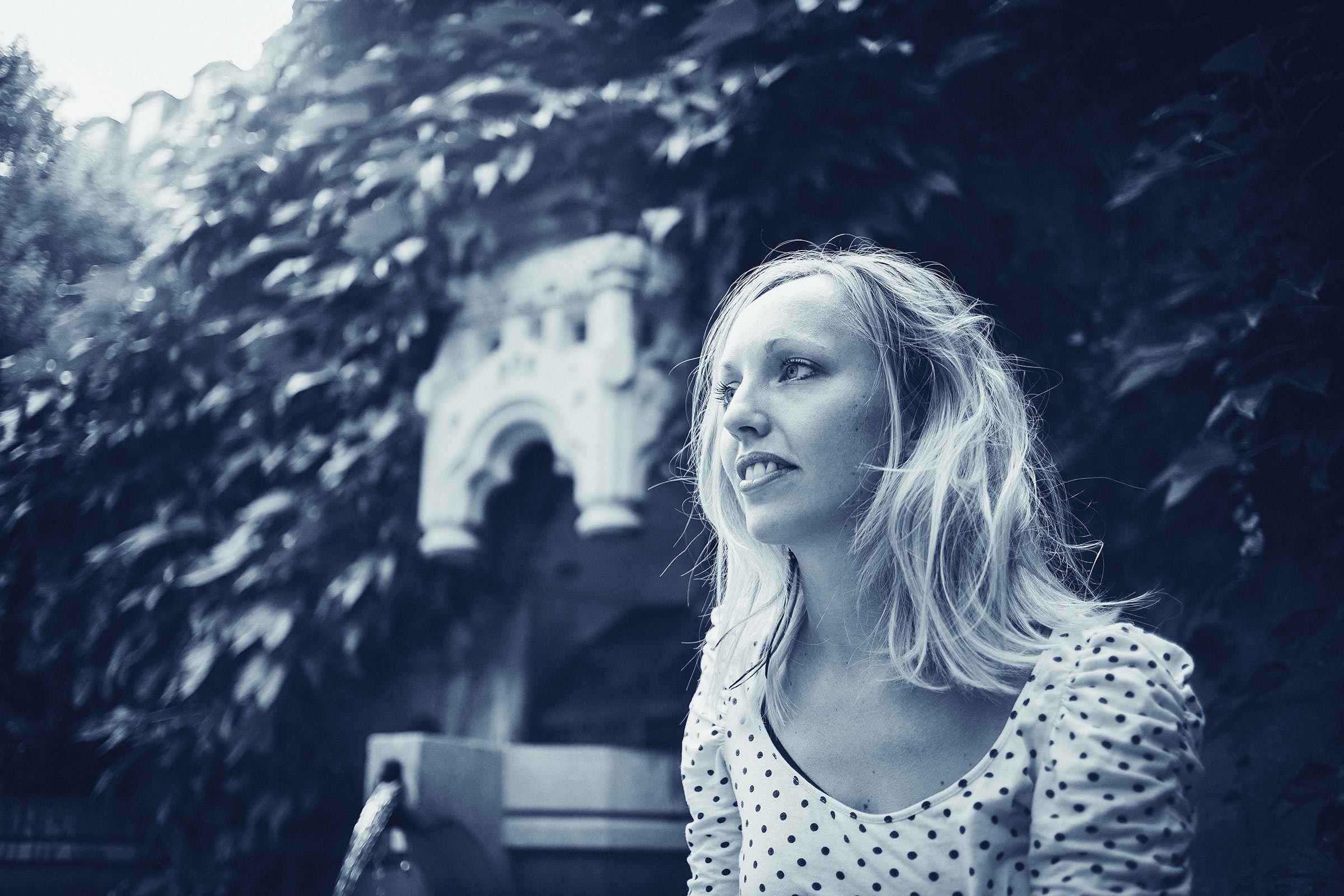 YOU DON’T HAVE A MIDDLE NAME?

BUT YOUR FIRST NAME IS TWO NAMES?

WHAT WERE YOUR PARENTS THINKING?

So they thought, “Why should there be another name?” [laughter] But my sister has two names.

IS HER MIDDLE NAME KIND OF STUPID?

No, it’s Elin. She’s named after our grandmother. But I’m very happy with the choice they made with Annasara.

YOU MUST HAVE THOUGHT ABOUT WHAT YOUR CHOICE WOULD BE IF YOU WERE TO PICK A MIDDLE NAME.

I haven’t really thought about that. [pause] Am I weird?

No. [laughs] I’m very pleased with my name. 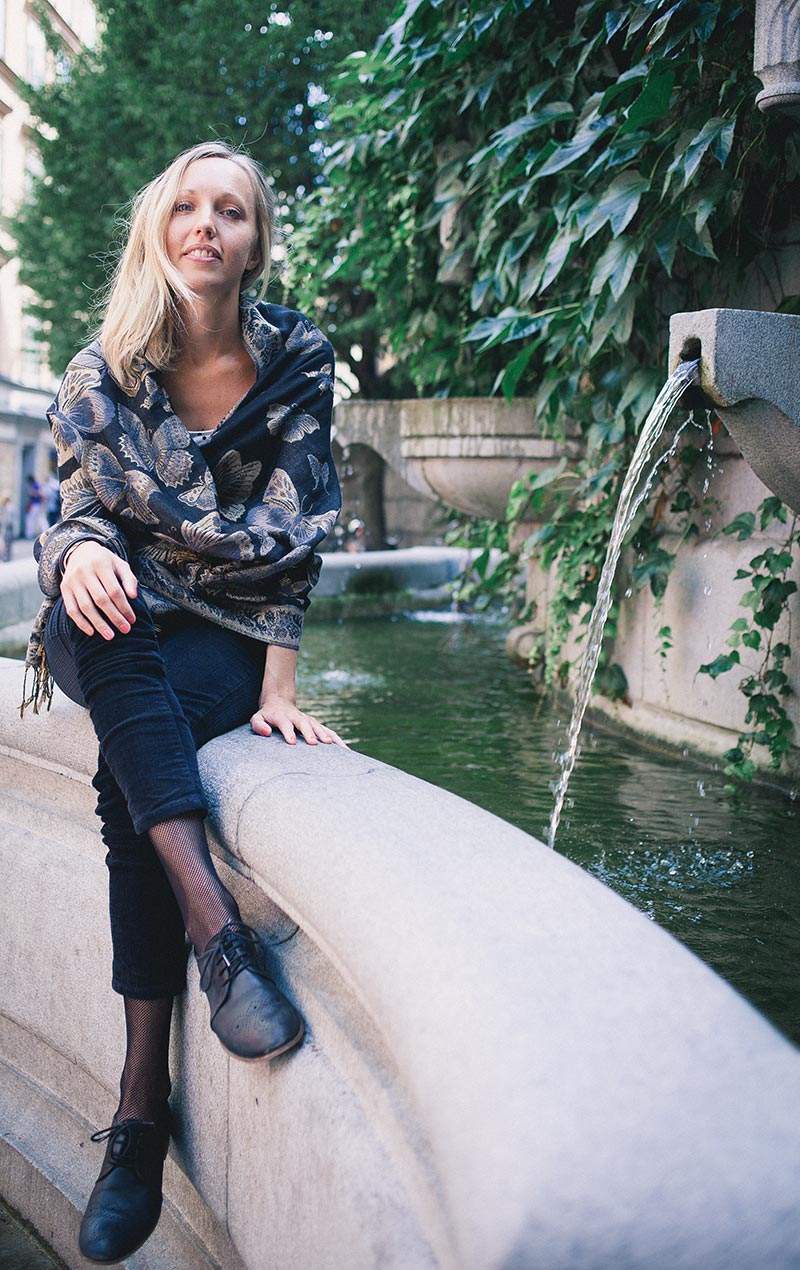 I don’t know. I think I’m not really girlish or womanish. I have a feeling I’m just… a person. [laughter]

YOU’RE JUST A REGULAR PERSON WHO HAPPENS TO BE A GIRL?

EARLIER, I ASKED YOU TO COME UP WITH FIVE DOS AND DON’TS OF BEING YOU, AND ALL YOU COULD COME UP WITH WAS “DON’T SKIP LUNCH.” [laughter] WHY IS THAT THE ONLY RULE YOU HAVE FOR LIFE?

[laughter] Well, I don’t like to have many rules. [laughs] But I’ve realized that if I don’t eat my lunch I get a bit sick. A bit ill, even.

Don’t get ill, if you can avoid it. [much laughter] I also had one “do” rule, but that felt so…

Yes! Actually, it was do take dance courses and do go to France if you want to. But that felt so pretentious when I tried to write it down. You know, (in a dumb voice) “Follow your instincts!” [laughter] “Don’t be afraid!” [laughter]

I’VE HEARD THAT BEFORE WHEN I’VE ASKED PEOPLE TO LIST THEIR DOS AND DON’TS. THEY’RE LIKE, “I CAN’T THINK OF ANYTHING. IT ALL SOUNDS PRETENTIOUS.”

But it does! Here in Sweden, maybe it’s part of the Swedish thing of not wanting to read about people who are trying to be better than you. [laughs] 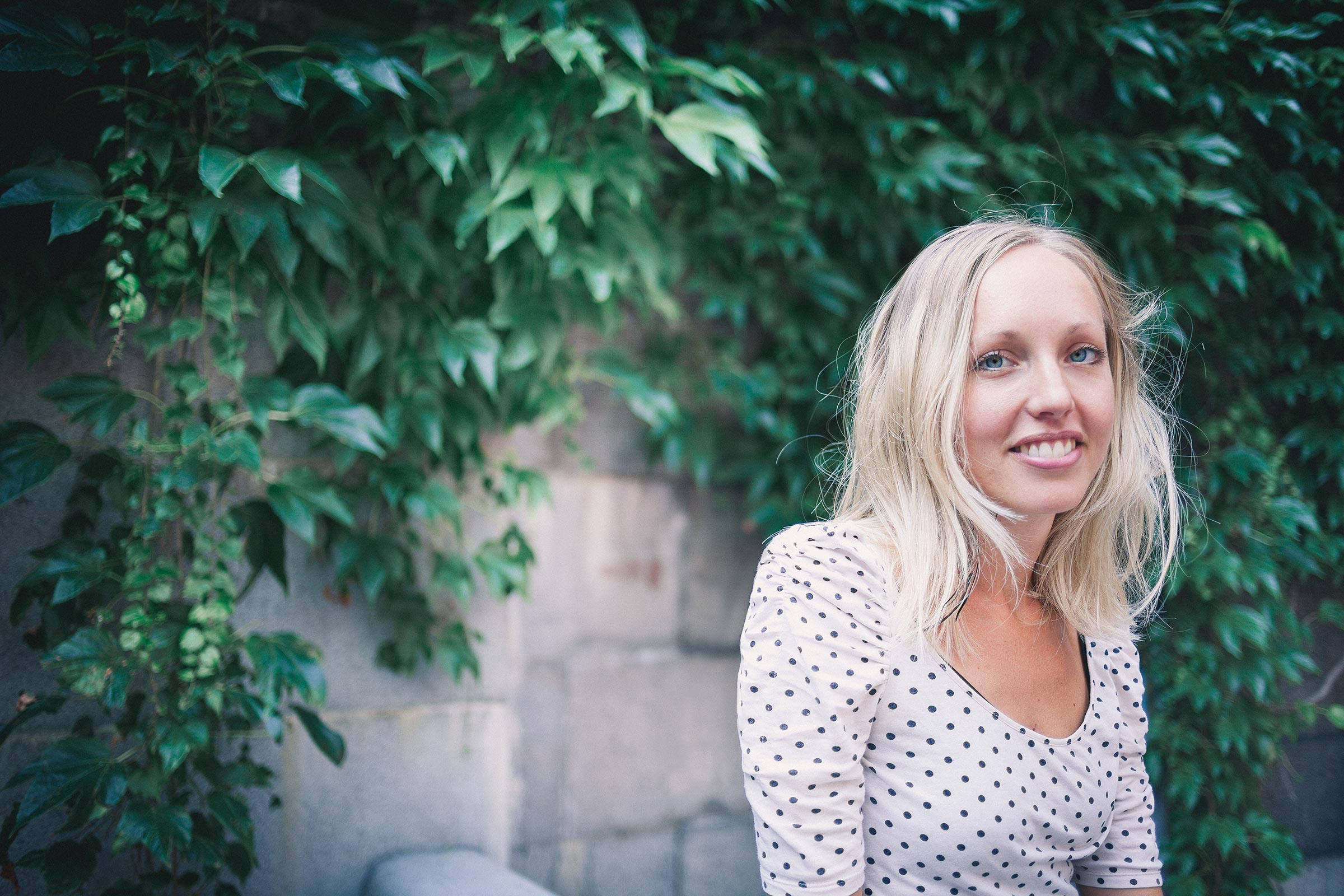 WHEN YOU WERE YOUNGER YOU WANTED TO BE AN AUTHOR, THEN AN ARCHITECT, BUT YOU BECAME A MUSICIAN. TELL ME ABOUT HOW MUSIC BECAME YOUR JOB.

I didn’t have a big moment or a big day when it just happened, like so many people do. I sort of decided in my last year of high school. I was thinking, “Hey, I don’t need to be an architect. I can try the violin.”

After that I enrolled at school in Stockholm and people there were auditioning for the higher school of music, the Music Conservatory, and I thought I should try that, too. I was accepted and then I ended up studying at the Conservatory for five years, because I didn’t want to stop. [laughs]

When I finished my studies I found myself with a job as a replacement member in an orchestra.

ARE YOU PRETTY GOOD AT PLAYING THE VIOLIN?

Well… [laughter] (embarrassed by the question) It depends on what shape I’m in, but I can be in pretty good shape.

BUT YOU HAVE TRAVELED THE WORLD PLAYING MUSIC.

YOU WENT TO MEXICO.

Oh, that was with my choir! I wasn’t playing violin on that trip. And that group is a semi-amateur choir. But it’s so much fun!

I WOULD SAY THOSE ARE PRETTY GREAT PLACES TO SEE.

Yes. And the US! I’ve seen “the world” with that orchestra. But with the real orchestra, I’ve only been to Vienna and Salzburg. 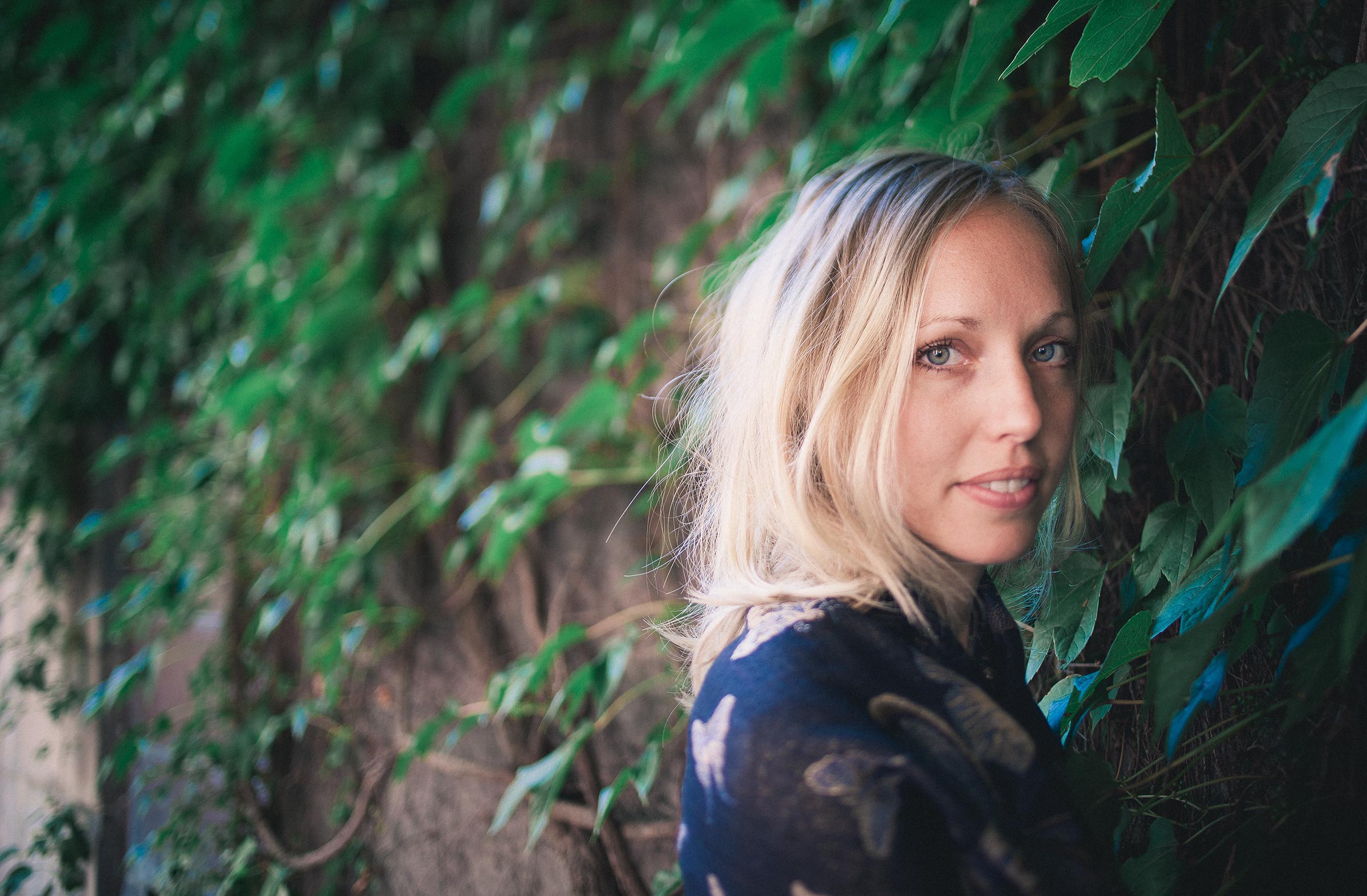 YOU ALSO PLAY PIANO AND GUITAR AND YOU SING. WHAT DO YOU ENJOY THE MOST?

I’ve been thinking about that this week, actually. Singing creates the nicest feeling in the body, I think. But the violin is the nicest because I’ve been practicing so much and for so many years, that I can do so many things. On the piano I’m very limited, so I can compare how it feels to not be so limited.

But on the other hand, on piano, you don’t have to work with intonation. It’s just a nice sound. Each key makes its own sound. It’s different.

I like them all in different ways! Can you write that? [laughter]

I CAN WRITE THAT! [laughter] I’LL JUST WRITE WHAT YOU SAY.

YOU MENTIONED A COUPLE WEEKS AGO THAT YOU MIGHT NEED TO STOP PLAYING VIOLIN BECAUSE OF HEALTH REASONS.

BUT WHEN YOU SAID IT, IT SEEMED LIKE YOU WERE TOTALLY FINE WITH THAT. WERE YOU JUST TRYING TO ACT LIKE YOU’RE STRONG AND YOU DON’T CARE, OR AREN’T YOU SO DISAPPOINTED THAT YOU’VE PUT SO MANY YEARS INTO A CRAFT THAT YOU MIGHT HAVE TO ABANDON.

(quietly) Yes, maybe both. [pause] But I’ve been having troubles for so long, so I’ve been a bit prepared for years that maybe I’ll have to stop one day. Maybe that’s why I’m…

HOW DO YOU FEEL ABOUT THE PROSPECT OF HAVING TO STOP?

[nervous laughter, as if she can’t believe the question] You know, I can’t really feel how it really should feel. I can’t really live something that isn’t here yet. And that includes everything in life, not just this possibility. I can’t image how things might feel. 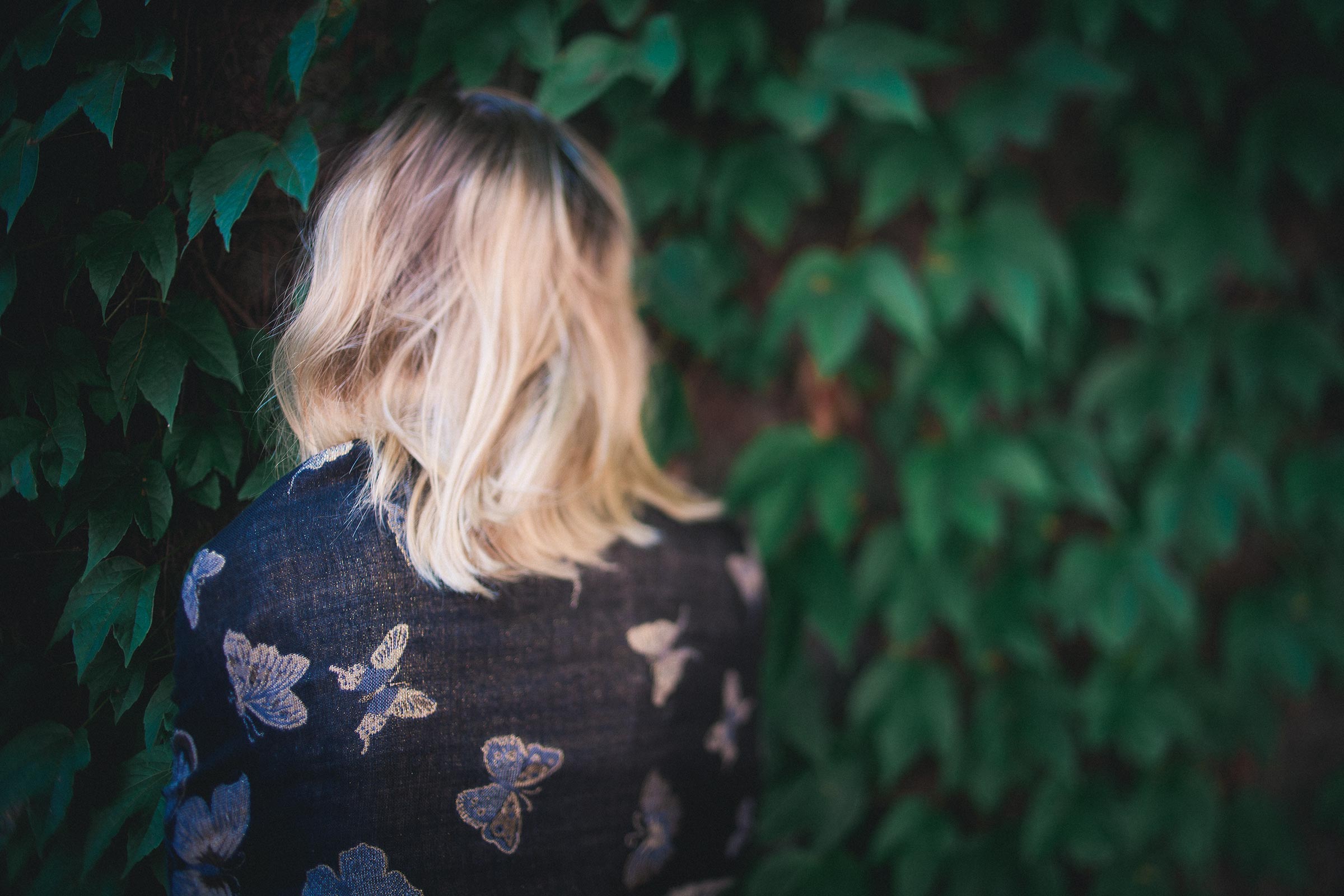 YOU CAN ONLY FEEL IT IF IT’S REALLY HAPPENING?

Yes. Yes. I think it’s something that I don’t want to think about too much. But also, sometimes playing causes me so much physical pain that maybe it could be a relief to not have that pain anymore. I also told you about the posture therapy I’m going to, and I think that might be my savior. Because when I play piano too much, that feels painful also. The same thing with using a computer. Everything. It’s maybe not just the violin.

IS IT YOUR SHOULDERS?

Yes. It’s my right shoulder and different places in my arm.

WELL, THIS ENTIRE INTERVIEW IS NOT JUST ABOUT MUSIC, BUT I DO WANT TO TALK A LITTLE BIT MORE ABOUT IT.

ONE OF MY FAVORITE QUOTES IS FROM THE PIANIST GLENN GOULD.

DO YOU KNOW OF HIM?

HE SAID, “I BELIEVE THAT THE ONLY EXCUSE WE HAVE FOR BEING MUSICIANS AND FOR MAKING MUSIC IN ANY FASHION IS TO MAKE IT DIFFERENTLY.” I THINK THAT’S REALLY FASCINATING, ESPECIALLY COMING FROM HIM, BECAUSE HE SPENT HIS CAREER PLAYING BACH AND MUSIC WRITTEN BY OTHER PEOPLE.

I think I’m… I’m sad that I don’t do it so differently. When I hear other people who are interpreting music, it’s very different some times. It can be so fresh and so exciting. So good. I try too much to copy, I think. Other people’s versions that I like and enjoy, of course. 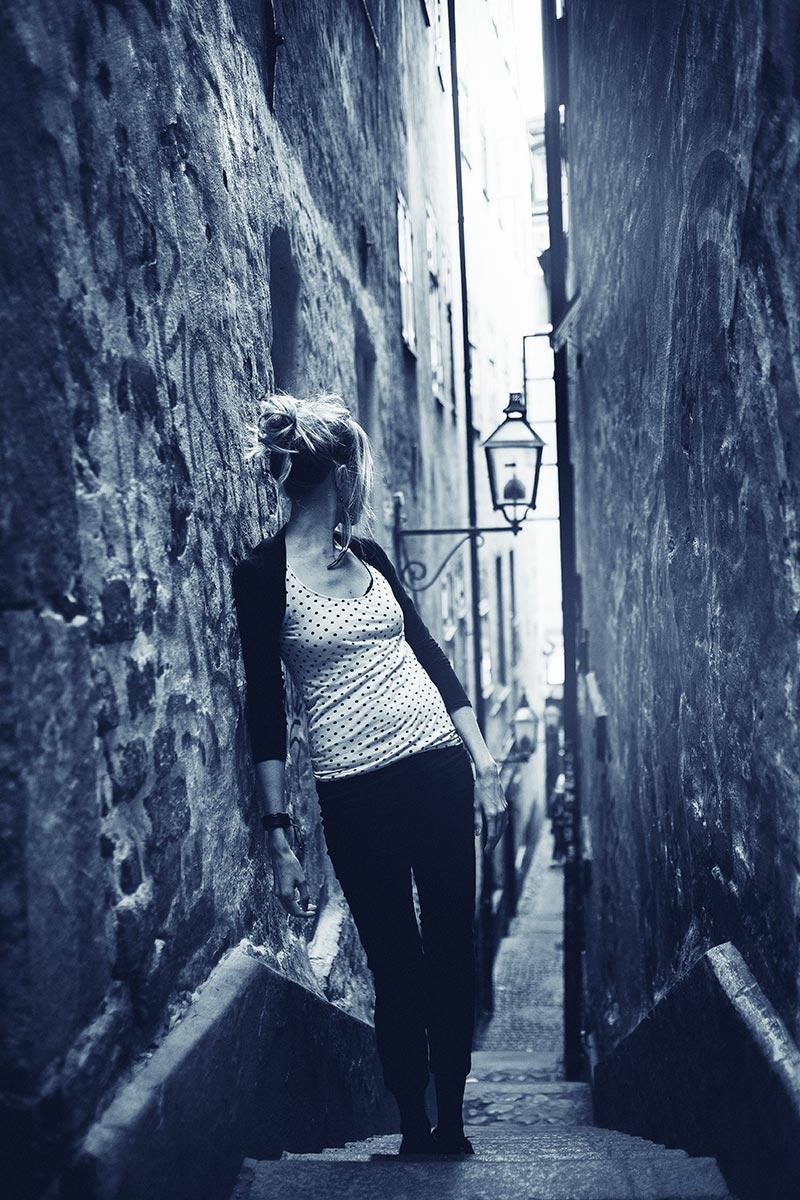 EVERYTHING YOU PLAY DOES COME WITH INFLUENCES THAT YOU LIKE AS WELL AS YOUR PERSONALITY, WHETHER YOU WANT IT TO OR NOT.

I’m not out to make new interpretations of classical music, because I make my own music when I want to make new things.

WHEN YOU MAKE YOUR OWN MUSIC, HOW DOES IT USUALLY START?

Usually in front of the piano, hearing chords, and hearing voices on it.

[laughter] YEAH. SO YOU PICK OUT THINGS YOU LIKE.

Yes, exactly. And put them together. 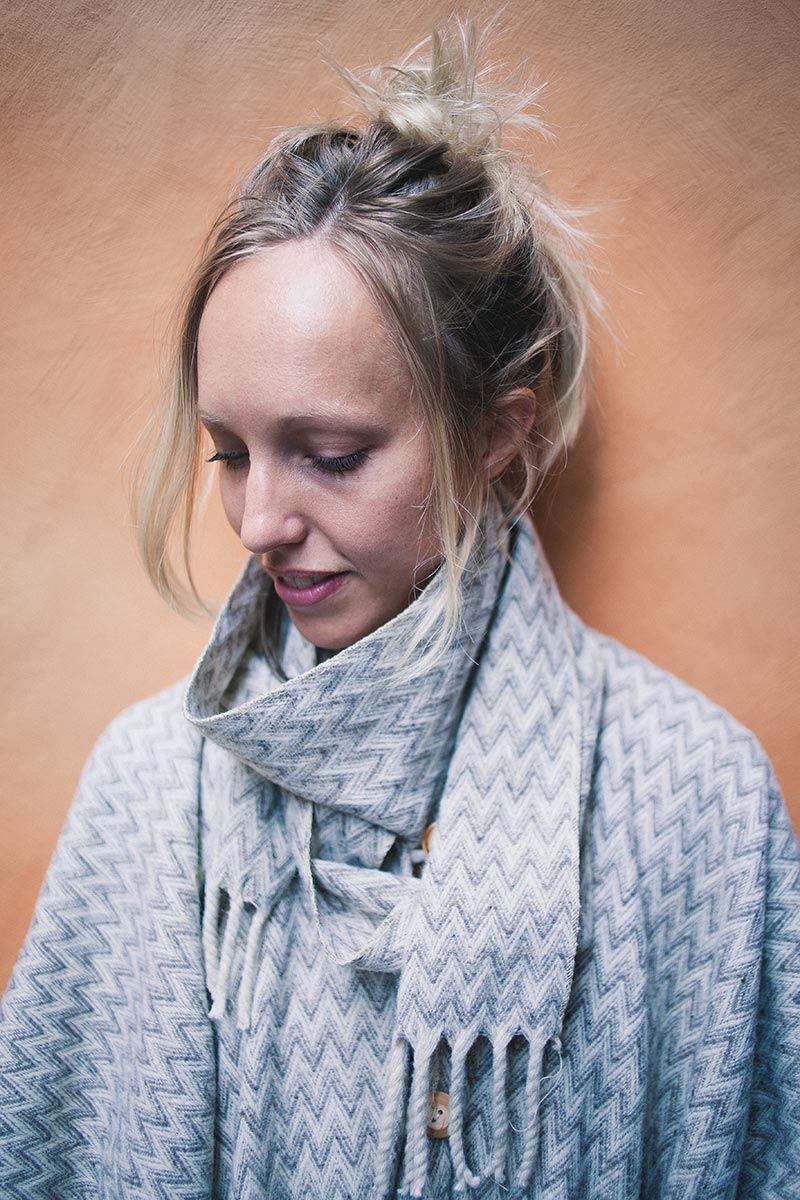 WHEN A STRANGER STARTS TALKING TO YOU, ARE YOU MORE LIKELY TO BE CURIOUS ABOUT THEM OR SUSPICIOUS?

[gasps] Oh no. I hate to say this. I think I’m more of the suspicious type, because something happened in France, 12 or 13 years ago.

I hate it so much that it happened.

I wanted to meet new people, new French people, to talk with. There was someone who was saying, “Well, I don’t have any friends. Do you want to have a coffee with me?” And I thought, “Yes! Why not?”

Then, of course, he was trying to… well… [pause] He began to act weirdly and started saying, “Oh, come on. We can do something.” And I didn’t want that.

We walked away from each other. I wanted to go home and he followed me. He dragged me into an alley and he held me and tried to kiss me.

I pushed and said, “no!” And I was able to escape. Since then I’ve been a bit suspicious of people.

Strangers, I’m suspicious. But people I don’t know who are friends of friends, I’m mostly curious. Of course. 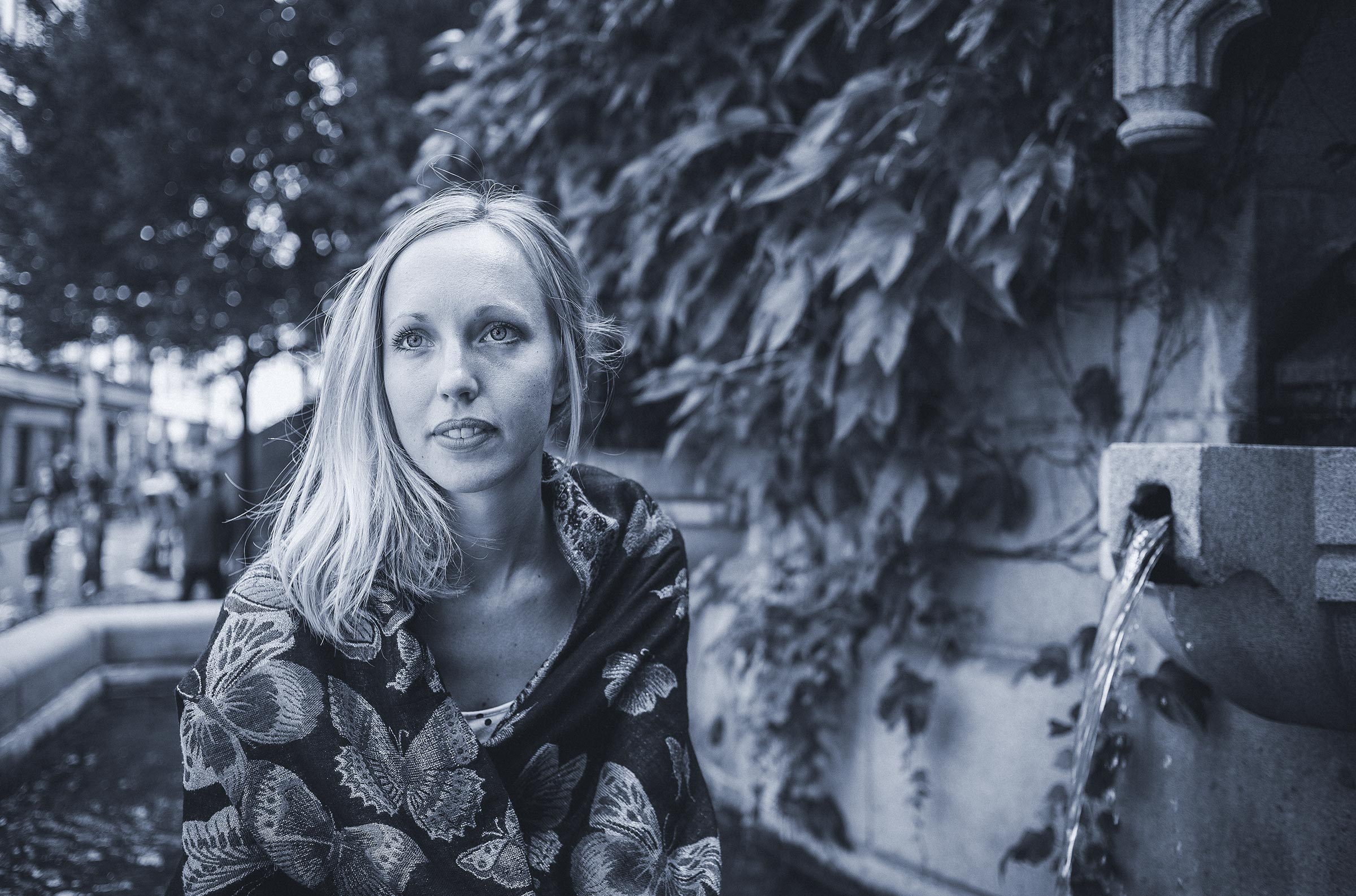 WHEN YOU TYPE YOUR PIN CODE INTO A CASH MACHINE, ON A SCALE OF 1 TO 10, HOW MUCH DO YOU TRY TO HIDE IT?

SO YOU SAY THE NUMBERS OUT LOUD WHILE YOU’RE PRESSING THEM?

[laughter] No, but I don’t cover my hands. I just push the buttons. [laughs] Three, maybe. Sometimes. Sometimes I’ll try to keep my hand still when I’m pushing the buttons. I’m quite good and not moving my hand while pushing buttons!

WHAT IS YOUR PIN CODE?

[laughter] Should I tell you here? [laughs]

IS LIFE MORE ABOUT STORYTELLING OR LIES?

DO YOU HAVE ANY GOOD STORIES ABOUT THINGS THAT HAVE HAPPENED TO YOU?

I’m not so very special! [laughter] But I’ve heard that when I’m telling people about things that have happened, that I might like to say it a bit “poetically.” Some people have told me, “It sounds like you’re reading from a book.” They are my own experiences, but I like to describe things beautifully. [laughter]

That’s storytelling, but it it’s not really story-telling. It’s reality!

WE’VE TALKED ABOUT WRITING BOOKS BEFORE.

YEAH. WHAT’S YOUR BOOK GOING TO BE ABOUT?

It’s going to be a poetical thing. Small verses. Observations of contemporary life in verse.

WHEN ARE YOU GOING TO WRITE YOUR BOOK?

IT’S NOT THAT LONG FROM NOW.

Right, but if I live…

IT’S SO OLD! MOST PEOPLE DON’T LIVE THAT LONG.

You never know! [laughing] Anything can happen, you know? 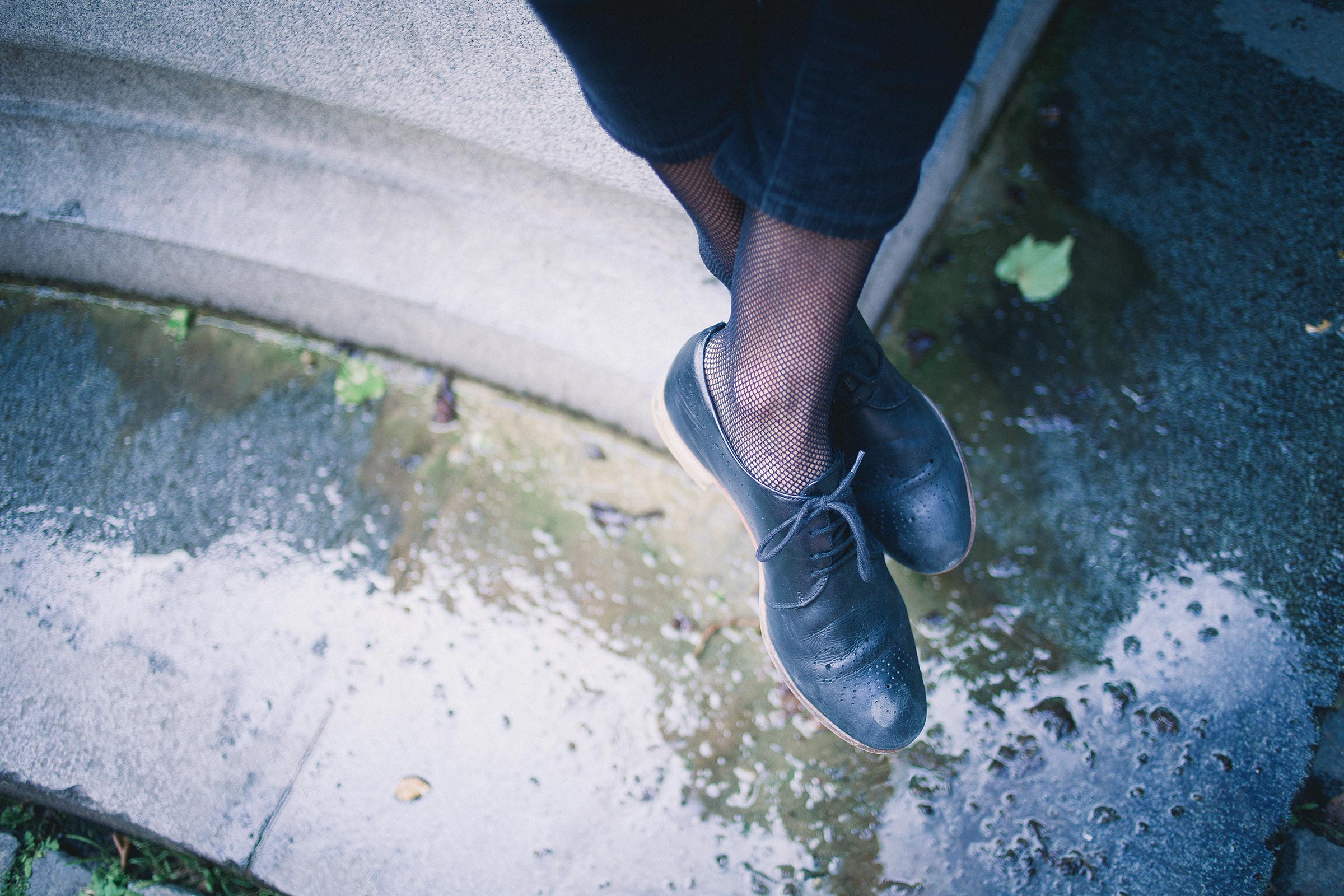