Alexis Luescher was interviewed in the summer of 1999 while working as a clerk at the Highlands-Shelby Park Library in Louisville. She has lived in Louisville her entire life and fights the war against naturally curly hair on a daily basis.

She speaks distinctly and clearly, and at a pace which makes transcribing her interview a breeze. The most valuable thing that the very small (5’4″, 100 lbs) Alexis ever stole was a Chia-Pet when she was sixteen. She reads lots of books, rarely watches television and, at age 21, still hasn’t gotten around to getting her driver’s license.

WHAT IS THE BEST THING IN THE WORLD ABOUT BEING ALEXIS LUESCHER THAT NO ONE ELSE IN THE WORLD CAN ENJOY BUT YOU?

Um, oh goodness. My fascination with kitchen appliances? Like toasters. And nobody understands that. [laughter]

They’re shiny. If you get the chrome kind, they’re shiny. There’s just like this nice little spring action on them. I like the ones that shoot the toast up in the air. Mine doesn’t do that, it’s kind of unfortunate, but… they just toast, they toast bread, and that’s such a good thing.

WHAT BRAND OF DEODORANT DO YOU USE, AND WHY?

Uh, Secret. Because it’s strong enough for a man, and it’s soft enough for a woman, or whatever that is… [laughter]

ARE YOU KEEPING ANY SECRETS FOR ANYBODY RIGHT NOW? 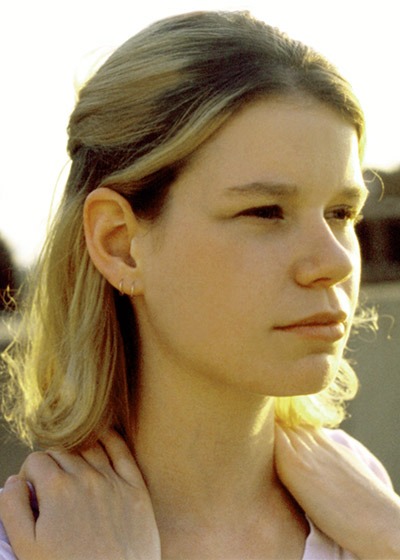 I KNOW THE ANSWER TO THIS, WHAT KIND OF CAR DO YOU DRIVE?

DO YOU PLAY ANY MUSICAL INSTRUMENTS?

Um, I… used to play the recorder.

4th through 8th grade. That was the gift of my music teacher Mrs. Eberenz.

DID YOU GO TO ST. MARGARET MARY? (inquisitively)

No, I went to St. Francis of Assisi.

RIGHT, YOU SAID THAT… I HAD A MUSIC TEACHER AT ST. MARGARET MARY NAMED MRS. EBERENZ.

It might be the same woman. Did she have migraines?

Yeah, that was usually badly permed?

YEAH. SHE WAS A MESS.

Yes. And had migraines, and when she would have these migraines she’d freak out and yell at first graders?

SHE WOULD BANG ON THE KEYS A LOT WHEN SHE GOT MAD?

She had big visions of recorder playing for us. Big.

DRAW A PICTURE OF YOURSELF IN 24 SECONDS…

THE NEXT ONE WE’LL NEED A PEN FOR ALSO, IT’S A GEOMETRY PROBLEM.

I can’t do geometry. [laughs]

I voted in the last election. I voted for Mayor.

I voted for Dave Armstrong [laughter], but then… I didn’t. [laughter].

White Mountain Creamery in the early, I mean, in the late ’80s.

WHO IS YOUR FAVORITE SUPERMODEL?

I don’t have one. [said as if she thinks she should, but…] I really don’t. 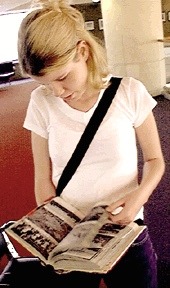 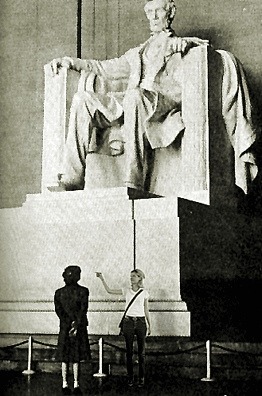 TELL ME ABOUT YOUR RELATIONSHIP WITH TELEVISION AND HOW IT HAS CHANGED AS YOU’VE GROWN UP.

I never watched a lot of TV because when I was growing up my mother was like, “One hour of TV,” and that was it. So I was never really into TV that much. Now, I may watch TV maybe twice a week, just because it’s never been a centerpiece of my life, and we didn’t ever have cable when I was growing up. So I guess it’s changed in the fact that there seems to be more… [six seconds] …more no-brainer shows where everybody seems like an idiot on there. But I think it’s always been like that, it’s just that I notice it more now. And, there’s… it just… I don’t understand the attraction to it because it’s not stimulating in any sense at all. I mean, very rarely is it. And if it is stimulating, it’s like a news program that’s scaring you half to death. For the most part, I don’t think it’s changed. I think it’s changed not much at all. I don’t think it’s gotten any worse or any better.

DO YOU HAVE A FAVORITE PROGRAM?

At this time? [five seconds] Not really. No. Occasionally I’ll watch “That ’70s Show,” but that’s about it. [laughter]